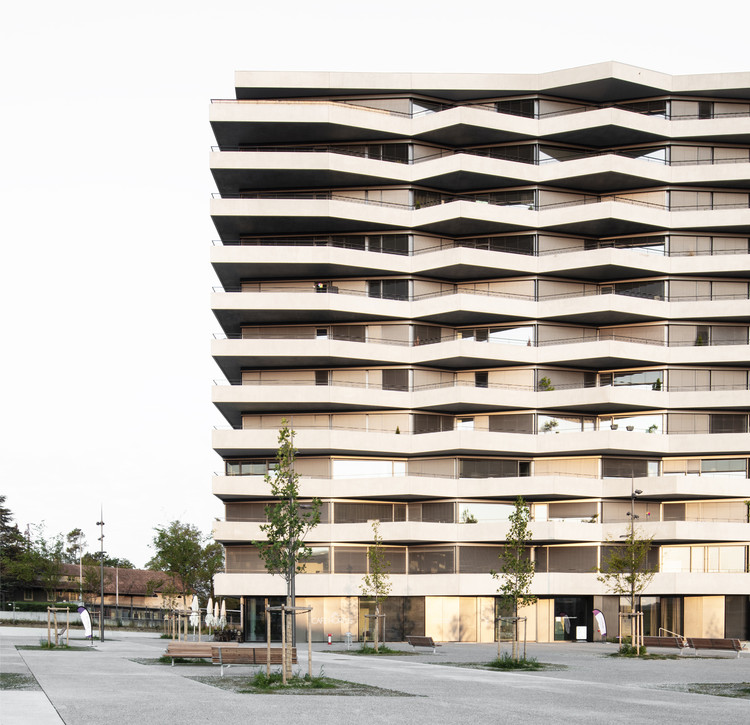 Text description provided by the architects. The project derives from a parallel study mandate SIA 143 won by Aeby Perneger & Associés through the Cooperative Les Ailes. The building is inserted in the urban plan of the eco-quartier of Verges, with the role to highlight one of the gateways of the quartier and complete a series of towers along the Napoleonic route that leads from Geneva to Saint-Genis-Pouilly though the CERN.

The volume to construct counts 11 floors above ground, placed on a 2-storey basement, with a total of 13 levels inscribed in a 22x45 m rectangle. Following the wish of the cooperative, the program of the building is mixed: 22 dwellings for elders provided with welcome facilities for the neighborhood, about 75 family dwellings, medical practices, offices and businesses, also including a small supermarket and a restaurant.

The project states a particular presence at the entrance of the quartier of Verges. The building is both multiple and unique, its border not clearly closed, its gaze turned toward the sky. Composed of an horizontal plateau and wrinkled edges, it stacks different floor shapes in a roughly coherent ensemble. Because of its sufficiently elongated volume, it does not try to appear as proper tower despite its pseudonym (C3 Tower), but rather a sort of millefeuilles, stratification. The cut of the smooth balconies give it an airy character that evokes the founders of the cooperative, Swissair’s employees. The mixture of the allocations and the dimensional heterogeneity of the housing program has naturally opened a reflection on the distributive typology of the building, keeping in mind the remarkable memory of Le Corbusier’s Unité d’habitation in Marseille.

The corridors of the central distribution have appropriate clearances and waiting benches, every doorway is marked with an individual style. In the lower floors, a communal staircase opens by facing the summit of the nearby Jura Mountains and connects the two levels of the basement to the office floor. The building opens all the premises with a panoramic overlook - a long, continuous window. Each apartment benefits from an individual loggia in the shape of a rhombus, truly an additional exterior room, that relates the horizon in a kaleidoscopic manner avoiding any frontality. The wrinkles in the facade contribute to provide a real light quality that reaches the centre of the floorplan.

The materials are raw or semi-raw: exposed reinforced concrete for the structure, parapets of the facade made of finely-striated, precast natural concrete that softens the light like a corduroy, windows and light parts in powder-coated aluminum, interior screeds of communal hallways in terrazzo, doors and flooring in oak. The average gross surface for each OCLPF is 25 m2.

Thanks to a very low return rate applied by the cooperative, the resulting rents are extremely moderate. With regard to exterior expression, the building of Ailes is difficult to date. The dynamic wrinkling of its façade is balanced by the soothing character of the materials used (natural striated concrete, dark aluminum and glass) and by calm horizontality of the composition.  This gives a particular vis-à-vis status to the neighborhood, slightly apart, halfway between the ancestor and the outside observer. 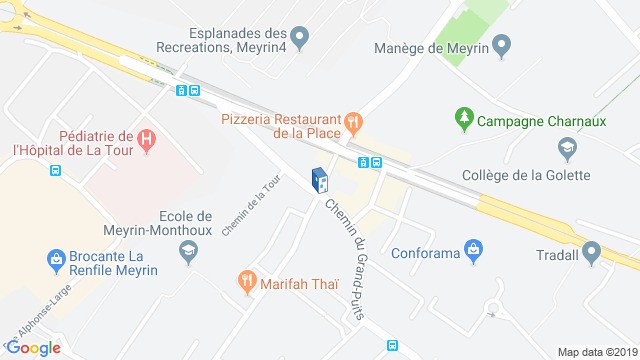 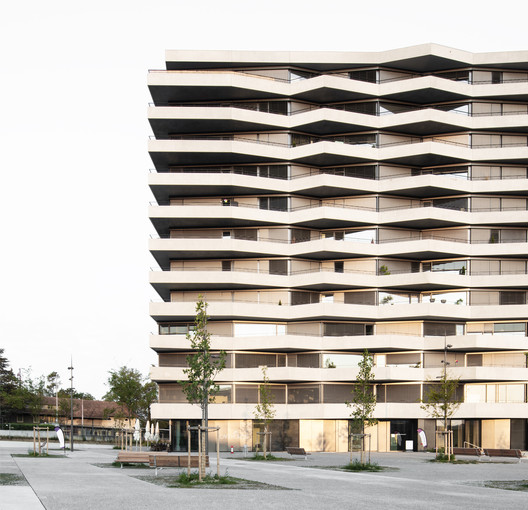