Save
The Warehouse / Eleva Arquitectura 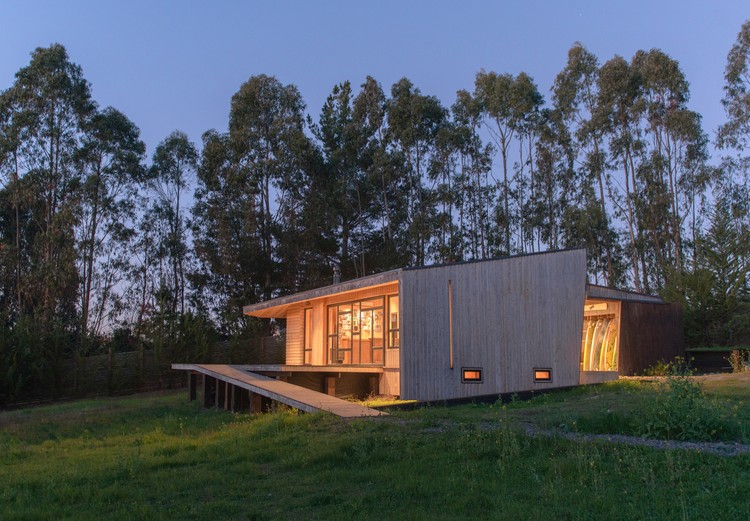 "A multidisciplinary place, played and above all unique" ... This was the dream of its owner who always proposed and maintained to reach beyond a traditional proposal.

As an annex to a house located in the town of Puertecillo, the Warehouse is, originally, a space designed for leisure, partying, social and family gathering, where the beach and surf are the soul of the place. Thus, Eleva was commissioned with one of his first projects, where he aimed to create a place that would invite the community, so it was proposed to make architecture that would break with the functional mono space through the creation of a reconfigured multiple atmosphere according to his use.

The challenge of connecting three parallel environments; an outdoor terrace, an apartment and a garage, suggests building two volumes that will dialogue and work together.

One of the volumes had to be heated and inhabited all year, while the other, to reduce costs, raised in light structure, without insulation, open and ventilated.

The meeting between these two is where the morphology of the project is born, which responds to the main architectural concept used: the volumetric intersection, where everything happens and the spaces are transformed.

The first volume, which contains a bedroom, a living room and a bar with history, stands by means of a rigid envelope built with imposing and personality, to protect itself from the strong south wind of the Chilean coast, through a great wall that falls on the ground as a shell.

Through the fold and the inclination of its facade, it embraces and contains the second volume of smaller scale, allowing air and light to pass, articulating elements of paths and permanence spaces.

In this second volume is where the atypical happens; a raised deck on inclined pillars in response to the gesture and the form of the total project, leaves a free floor composed of a barbecue, a workshop and a showcase of surfing and windsurfing equipment with a collection of boards, voters and Masts, all linked directly to a service area and an open dressing room as part of the surf rite.

To close and open these pre-established limits and to look for the temporal interaction between spaces, it is that mobile planes were designed to achieve wide and dynamic openings with intention: the department as a central nucleus is transversally related to the other two spaces. Towards one side, it connects to the garage by dismantling 5 panels fitted together, an area that invites you to start the exterior-interior route by crossing a sliding gate in iron and wood. The department, on the other hand, goes outside through a large window made of aluminum and glass profile that slides on its own axis interposing and crossing planes to achieve maximum opening and a total fusion between the three areas.

As a complement to the breadth, you can access any enclosure adjacent to it by sliding doors, all made in work, which are hidden within wooden bearing walls, the main structure of The Warehouse. With the challenge of supporting large lights, steel beams and pillars are formulated, which fasteners on plates and bolts are hot galvanized prior to installation to prevent rust from entering the structure.

Just as the materiality, the architectural elements and the structure play a fundamental role in the development of the work, so is the furniture, cataloged as a structuring component of the space in modern housing. Both ornamental and functional wooden furniture were made, all present as walls, room dividers or objects.