Save
Tatiana Bilbao: "The Greatest Challenge in Designing the Mazatlán Aquarium Was Recreating What Goes On in the Gulf of California"
Share
Or
Copy 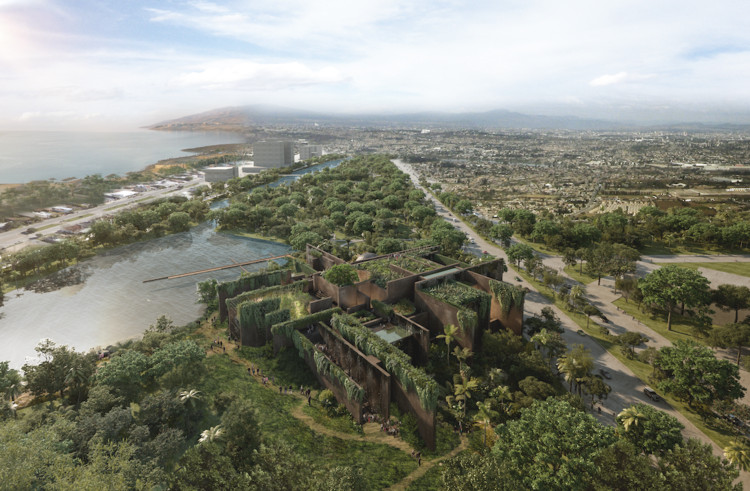 The aquarium project was a part of a large-scale plan to revitalize the Parque Central in Mazatlán, Mexico. The project, designed and overseen by Tatiana Bilbao Estudio, seeks to build onto the already existing natural, cultural, and public space in a way that highlights its global quality and uniqueness. For visitors, the aquarium is an opportunity to explore and experience the marine ecosystems of the Gulf of California. For locals, it’s a look into the marvels of their own backyard. In this interview, we sit down with Mexican architect Tatiana Bilbao and get the details about the project, its design, and the challenges that come with building one of the largest aquariums in Latin America.

Monica Arellano: Tell us more about how the idea to build an aquarium in Mazatlán came about.

Tatiana Bilbao: 5 years ago, we were invited to work on the Parque Central in Mazatlán, which had always been called “el Parque Central.” In reality, it was nothing more than a regulation pond. Anyways, the city grew up around it until it couldn’t anymore because of flooding. When people realized this, they decided to make it into a park, eventually adding on football fields, a forum, an aquarium.

It grew in an intuitive manner with no real planning until one day an association came up with the idea to recuperate the Botanical Garden of Culiacán. We knew that one project would be designed by Fernando Romero and another by EHDD, so we designed the park and left space for these two architects to do their work. Afterwards, we started constructing the park. Later on, the same client who commissioned the park came with private funding and convinced the government to get involved with the project and provided the money to get the project underway.

MA: What was the design process and the structuring of the architectural program?

TB: To design the park, we had to keep in mind the regulation pond which has a hydrological system that the whole city is connected to. We did this by analyzing everything that was already there, and we even proposed a very ambitious idea of connecting all of the city’s green spaces. This part of the project is still in the works but hopefully it will be completed. Anyway, we specifically designed the project to encourage outdoor activities in a place where there wouldn’t be any flooding.

However, here it floods easily and these programs can resist the flooding. In reality, the programs that we are proposing are meant to resist natural phenomenons and when we were designing the space, the client said that the aquarium shouldn’t  look like an aquarium but rather a space that worked with the natural phenomenons. This was a difficult concept for me to grasp because an aquarium is a space where man is in control and you’re essentially showcasing a world where you cannot live. From that moment on, the project was based on creating a center for research dedicated to exploring and protecting life in the Gulf of California.

Before, when we arrived, the aquarium had penguins, whales, and corals from Australia and from the beginning we knew that that wasn’t what we were going for. Instead, we decided to embrace the idea of a space showcasing the Gulf of California, one of the most important and most diverse marine ecosystems in the world. Once we got the idea in our head, it was decided that the new aquarium would become the space for the public to come and visit while the old structure would become the Spatial Research Center, where researchers could work and contribute to the protection of the Gulf’s ecosystem.

MA: Tell us more about the concept and creative process of this project.

TB: As I mentioned to you before, we wanted to create a space to show a world where humans cannot live and we wanted to bring that world here, so we thought really it’s a building that at one point existed. We don’t know why, however, when the sea rose, the majority of life on Earth lived in it and later the sea itself returned some of that life to land. I believe the sea is cyclical, it rises and falls. I like to think that nature took over this building that already existed and made a home for itself there and that’s the central concept of this project-- and only when the sea brought it back to the surface, can humans see what happened in this space.

Obviously, we had a program that accommodated all of these ideas and this is the result. You can access it via two large staircases, one that connects to the park and the other one to the street.

MA: What does the placement correspond with?

TB: The aquarium’s placement is done in a way that corresponds with the old aquarium. With the old structure, we had to find a way to build onto it and connect it with the new structure. You go up and you have an ethno-botanical garden that overlooks the lagoon and allows to immerse yourself in the building.

You go back downstairs and from there you choose the direction to take. You have the gift shop, cafeteria, laboratory, etc. You have an auditorium that provides an educational space, a deep-water exhibit, a exhibit for coastal areas, land, forests, and a large aviary. The idea is to show that nature dominates the building in a very brutalist way, almost like a ruin being reclaimed by nature and we are witnesses to it.

MA: What was the challenge in designing an aquarium of this magnitude?

TB: I think the greatest challenge was understanding how to create a building that immerses you into what’s happening in the world so that we can better care for it. As a society, if we don’t know something, we don’t know the value it has even if it’s essential to our existence. We have to understand it in a more integral way. Here, nature dominates the building in  a way that benefits the species kept here and also teaches us as humans that nature is still the most powerful force on Earth.

This was the greatest challenge and it’s yet to be seen if nature will take over the building or not. The standards and the size of the aquarium correspond with the international standards set by other aquariums like the Vancouver, the Valencia, or the one in Monterrey, allowing for collaboration between all of them.

MA: What is the most valuable contribution that this project makes to the city?

TB: The park is three times the size of the Botanical Garden of Culiacán but the investment cost is different. It’s all about benefiting Mazatlán since the primordial objective is maintaining the costs of the current aquarium. However, we’re also talking about a world class aquarium that’s a part of the city’s infrastructure. It’s more of a philanthropic move on the part of private funding.

MA: What does architecture mean to you? I myself see it as a language that communicates the entire creative process with every project.

TB: The process is very important for me because it shows whether or not the idea is going down the right or wrong path. It allows you to communicate what you’re doing and to gather all of these ideas that come up. Every project has a different way of representing itself.

For this project, we made collages that focused on the concept of the ruin that I mentioned before. That way you could see how everything comes together and the vibes given by every space. Of course we had to to make renderings for the client but really this isn’t an important part of the creative process and if you show too much you wind up with a very fixed hyper-realistic concept that doesn’t allow for creativity. With collages, the imagination can flow and add to the project, so it’s a very important part of the design process. 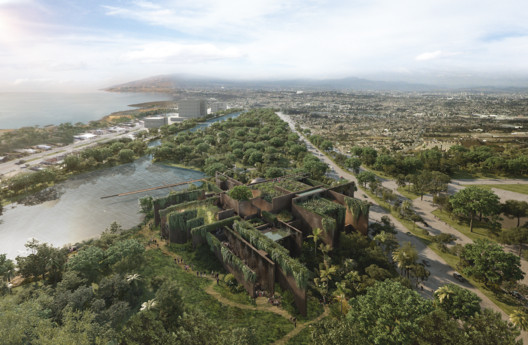