Save
The Top Apps for Architecture in 2019
Share
Or
Copy

With a very fast-paced life, we are becoming more and more accustomed to utilities that can make our workflow easier, more productive and efficient especially when some of us are always “on the go”. Our mobile devices, tablets, and laptops are gaining prominence every year, offering us more suitable and useful applications. Read on to discover the top architecture applications for 2019, with recurring big names and newcomers on the tech scene.

MagicPlan uses your mobile’s camera to measure spaces and create almost accurate plans that can be exported as PDF, DXF or JPG.  Easier than other applications, you only have to stand still, preferably in the center, and let your device scan the room.

This application, also for the wide range of professionals in the field, is, in fact, a ruler, used to measure different features like areas, distances, perimeters, or angles. It also estimates coordinates, through its GPS tracking tool. On IOS, it ranks at 33 in the productivity division.

Rated 5 on IOS in the utility section, Construction Master Pro is an application that helps you with your calculations, instead of a regular calculator. It can assist anyone in estimating areas, volumes, etc., and can be used anywhere, on-site or in the office.

This application helps with on-site analysis as it identifies the sun’s position and path, and illustrates visually the amount of sunlight received by the building, through a virtual compass and an interactive 3D view. Actually, Sun Seeker has a wide range of users and is not only intended for architects.

Developed by Autodesk, SketchBook is a drawing app that offers the proper tools to sketch as if you were on your computer, with all the pencils, markers and brushes. It is intended to the larger audience, as it also gives drawing guidelines for a proper perspective.

This application allows you to sketch on top of images, storing and organizing, by layers, your ideas. Morpholio Trace gives the option to add comments on images, helping with sharing initial conceptual notions. In fact, this app comes in handy during the first phases of the designs as it allows us to scribble, draw and express the first artistic thoughts, especially with its augmented reality option. Launched a couple of years ago, Morpholio Trace is still a fierce competitor.

Very efficient for architects, these Autodesk apps allow you to open your AutoCAD and Revit files on your mobile. The user can easily edit, draft or create conceptual models on his device, and export them later on to his computer.

This app allows architects using the ArchiCAD program to access their 2D and 3D files on their mobile, as well as making measurement adjustments on site. In fact, with its Hyper-model feature, navigation is easy and access is instant.

Very simple to operate, uMake uses your 2D drawings to form 3D shapes, instead of modeling with planes. The app mostly works on IPad, but it allows simple navigation on your mobile. It is considered as “the missing link between sketching and CAD”, offering the possibility of viewing the 3D designs in augmented reality.

With its widely clear interface, the iRhino 3D app allows you to view any Rhino model on your mobile device, as well as pan, zoom and rotate effortlessly. In fact, with this app, you can easily access all your 3-D models from your library or load them from other resources like websites, e-mails, Dropbox, etc. 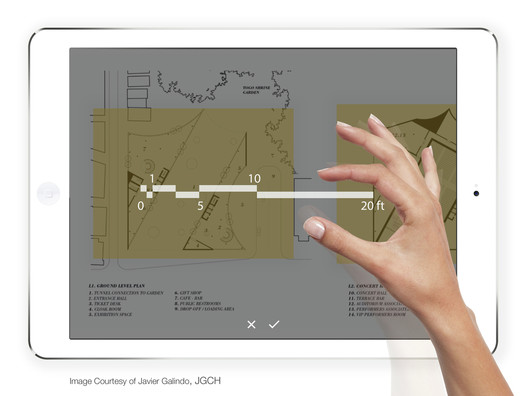