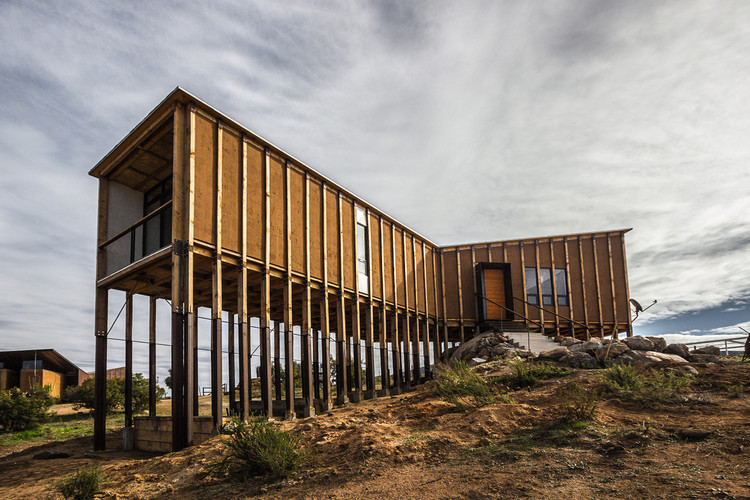 Text description provided by the architects. The project is located in northwest Mexico, in the Valle de Guadalupe, Wine Route, which is a place with significant growth and development of the wine industry.

According to a master plan established in 2013, the first step in the case of an intervention in the property should be the development of a brewery named Media Perra, which was built in 2014. As a second step, it was considered the design and construction of the house of our customer: Media Perra House.

For the development of the project, it was given an area with very peculiar natural features, a steep topography with sharp level changes. A large-scale rock was an important part of the possibilities, with the intention of making it versatile with our proposal.

Adaptation and connection with the surrounding area were concepts that led us to decide that the rock was a symbol of belonging to the place and that the new house should be related to and interact with it.

In order to connect living and nature by creating a bridge (through the rock) and producing a dialog between both, the stairs of the main access to the house and part of the foundations were settled in the rock.

We raised the main floor of the house using wood and steel pillars, with the solid idea of letting the ground floor more permeable and open in order to not cause a huge impact in the natural land and use the lower floor as an open-air auditorium for family gatherings and events.

With that, we wanted to achieve a sequence and a vertical rhythm that would be a reinterpretation of the façade of its predecessor and now part of its context, the brewery Media Perra.

The area of the residence is only 75m², which is the ideal space for our customer needs: a master bedroom, bathroom, closet, living room, kitchen, pantry and a mezzanine for the guests. The main views to the surrounding landscape are centered in the areas of the master bedroom, living room and mezzanine.

The residence orientation, the handling of sunlight and the use of materials, such as exposed wood, straw for the thermal insulation inside the walls, besides the application of an ink made from the land, are participating elements in the design composition of the house and a convergence point between living and nature. 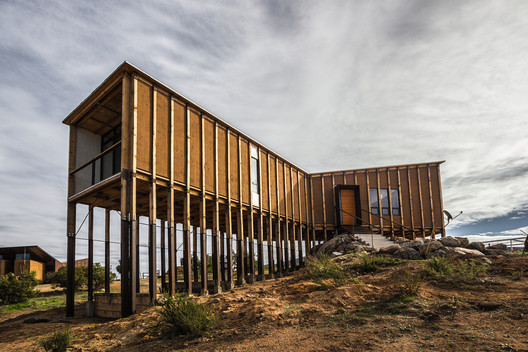