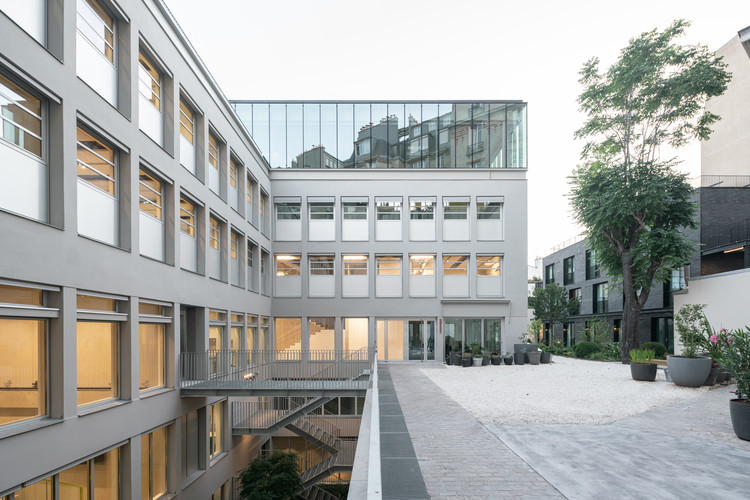 Text description provided by the architects. In the heart of the 11th district of Paris, the islet located at 224-226 Boulevard Voltaire is a forgotten site, almost kept secret. The renovation and extension project proposed by Franklin Azzi is part of a respectful approach to built heritage, based on the initial principles of the design of the building.

Saved for many years, this islet today is under the impulse of DESKOPOLITAN to become a unique place. Its singular position at the heart of the island makes it an unusual place where one of the first urban issues was to open the site to the district thanks to a rich program. In this way, nearly 6,000 square meters of activities and varied uses for innovation are gathered: workspaces, a hotel, a restaurant, sports studios and a crèche.

History and context. The 226 boulevard Voltaire, located close to the village Faidherbe formerly known for its cabinetmaking workshops, the village Paul Bert and its first-class shops, is one of the emblematic places that bear witness to the strong industrial past of the 11th arrondissement of Paris.

Behind this address hid the house Cusenier, founded in 1868 by Eugene Cusenier, known for its liquors, absinthes and other spirits today forgotten. In 1871, the Cusenier factory set up at 226 boulevard Voltaire to install its head office and its store of sale. The year 1894 is marked by a change of general direction which launches the construction of the building that we know today. It hosted in its basement a vault room, guardian of the formulas of the brand.

Over the years, the former stronghold Cusenier then became the headquarters of Mutual B2V that will occupy the premises until the early 2000s, before the RATP acquired it to deploy a command center of the metro. The project will finally be abandoned in 2006. In 2015, Deskopolitan buys the real estate complex from RATP and launches the rehabilitation and extension project for which the Franklin Azzi agency was commissioned.

Preserve the soul of the site. Faced with the architectural and patrimonial wealth of this site, the project led by Franklin Azzi is oriented towards the bias of a bold and sensitive rehabilitation, anxious to preserve the soul of the site while directing it towards a contemporary architectural response.Based on an in-depth analysis of the morphology of the buildings and their constructive principles, the aim of the project was to make the existing fabric compatible with contemporary uses. Thus, the primary frameworks of the buildings are preserved, as well as the existing fills and openings in order to include this rehabilitation in a respectful and sustainable approach with a low environmental impact (BREEAM certification "Very good"). The tertiary character of the building is maintained in order to preserve the ordered layout of the post-beam structure as well as the existing openings. On the facades, we find the materials that make up the structure: the exposed concrete and the protective coating.

A contemporary writing dialoguating with the existing. The contemporary extension, creating two additional levels (6 Levels), is an extension of the rigorous writing of the original building. An over-densification of the plot by the extension of the building did not seem necessary, because it was essential to let the inhabitants of the neighborhood to reclaim the plot of a site almost forgotten.

In addition, a new back-to-back building hosts the Bed & Coworking Hotel Program. His architectural writing takes the codes of the site's industrial materials, brick and metal. The project thus interacts with existing buildings and blurs the ruptures created by the fragmentation of the existing. Franklin Azzi’s ambition has been to transform a backyard site into a living and reconnected urban ensemble in the city.

Restructuring by vegetation. In addition to the architectural approach, the landscaped component is also structuring. Indeed, the nature of urban soils and their valuation in a dense city like Paris is a real issue. Therefore, the project proposes a strengthening of the presence of the plant through the creation of collective and generous landscaped areas.To do this, all spaces in the ground are treated in the manner of a landscaped garden crossed by several pedestrian paths; the slab spaces are planted with the addition of topsoil and will accommodate plant pots of different sizes.

These devices allow the creation of visual breakthroughs delimiting the spaces to be invested and thus guide the different pedestrian circulations. Finally, in response to a global environmental approach based on the re- appropriation of outdoor spaces by the public, the fifth facade is made accessible. A terrace and a vegetable garden have been created, with the aim of developing an urban agriculture to feed the restaurant and benefit the various users of the site. 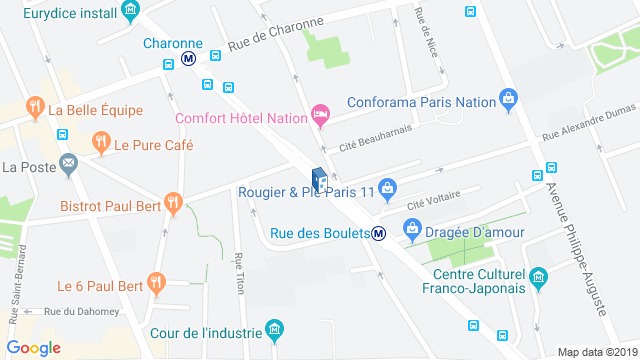 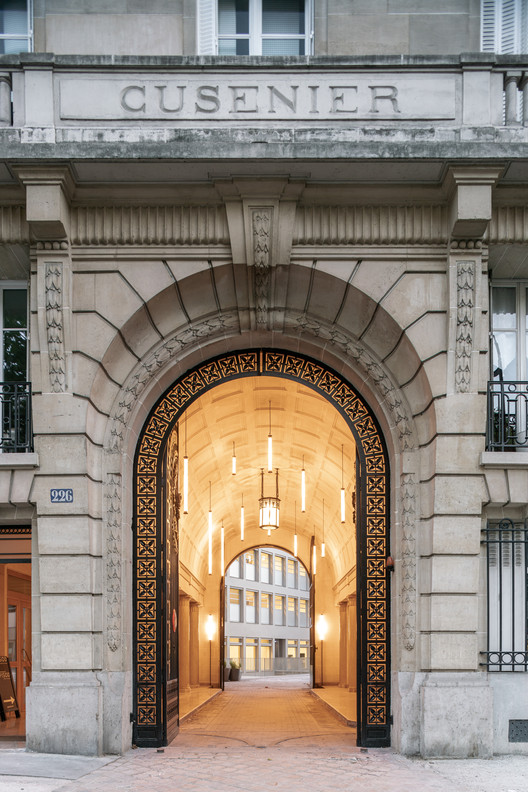 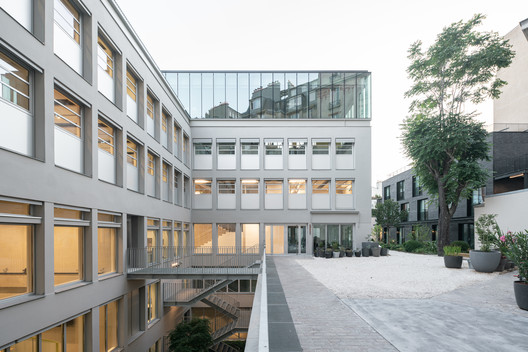