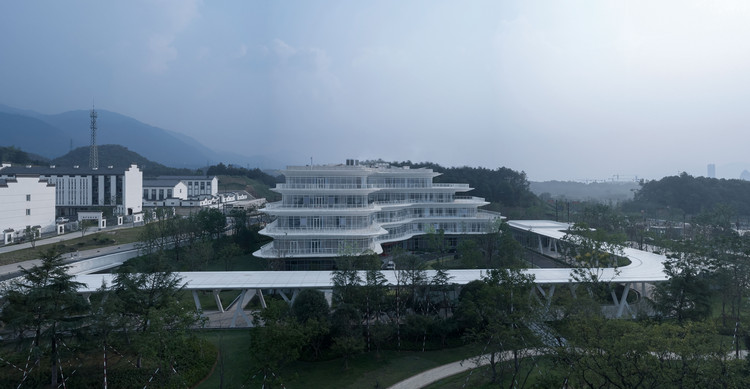 Text description provided by the architects. The high-speed rail is no longer just a means of transportation, but an important engine for regional renewal. The rapid development of the high-speed rail station network is changing China’s urban pattern with an overwhelming momentum. While breaking the geographical boundaries, it has also reshaped people’s sensory perceptions of time and space.

However, due to the remote location, lack of resources and imperfect associated industries, many high-speed rail stations still remain in the traditional mode of “coming and going in haste”. In addition to the lack of distinctive features and tailor-made design, the status of the “similar cities and similar stations” is extremely serious in front of the station.

In this context, Tonglu County of Hangzhou, with its rich cultural deposits and excellent geographical location, makes use of the high-speed railway to promote the construction of Tonglu Station according to local conditions in a sustainable way. It introduces the Fuchun landscape into the landscape design and makes the slow traffic system the starting point of the urban greenway; furthermore, the coordinated development strategy of “Greater Hangzhou” is integrated, thus promoting the benign interaction and organic coordination of high-speed rail construction and urban development, and ushering in the 2.0 Era of Tonglu High-speed Railway New City.

Miniature Landscape
Located on the “Hangzhou-Huangshan Artery” in Tonglu County, Hangzhou City, Zhejiang Province, Tonglu Station on Hangzhou-Huangshan High-speed Railway adjoins Daqi Mountain in the south, and faces Fuchun River in the north. Close to the urban area, and connected with the emerging Science and Technology City and Health City, it is an Elegant and Graceful Place written by Fan Zhongyan and a Home of Natural Treasures painted by Huang Gongwang.

The square-shaped base is about 180m long from north to south and about 450m from east to west. The design team develops a Fuchun landscape painting by concentrating the advantaged natural and humanistic resources in the micro-topography treatment, and makes a spatial pattern of intertwined mountains and waters through the spatial organization of architectural landscape. It conforms to the ecological strategy of integration and symbiosis and the era concept of civilization and efficiency.

The station square is basically symmetrically arranged with the central arc-shaped water area as the axis. Through the wind-and-rain corridor, the landscape road and other techniques, the slow traffic system is created to echo with the Tonglu terrain, and stretches from the monomer of the high-speed railway station at the south end of the axis to the county town, the riverside and the distant mountain... thereby achieving the seamless connection between the walks in the square and the urban environment. At the same time, according to the existing planned road network and green space planning, new walks are added and connected into a checkerboard shape to build the integrated slow traffic system of the whole Tonglu.

Condensed Landscape Essence
Architecture triggers emotions through interaction with environment and people, which is a way to reach the multidimensional scene. Therefore, the project’s monomer program strives to create the ultimate space experience and aesthetic experience. The contemporary architectural techniques are employed to express the charm of the landscape and interpret the brushwork of Chinese painting in the vertical space.

The individual building of Tonglu High-speed Railway Station is located at the southernmost of the center axis of the site, adjoining Tongjun and Daqi Mountains and overlooking the Fuchun River. The designer adopts techniques such as topology, tracing and contrast to conduct a serialization study on the surrounding geomorphic features, and then abstract them after concretization, thus presenting a more transparent and modern sensory experience. At the same time, the station building extends the landscape characteristics of Tonglu from the facade to the interior. The streamlined shape of the dome and the triangular aluminum gusset echo with the smooth, calm river surface

The complex building on the northwest side of the station building extends upward through layers of terraces to achieve the purpose of vertical greening. The plane is curved, and the facade is mainly made of glass and aluminum. The fine division reveals a simple and elegant architectural image. The part of the complex building adopts the method of earth-covered construction and is more closely integrated with the landscape design. The whole building seems to grow out of the ground, stretching its light, soft posture and blending with the surrounding environment.

Gateway to the City
At present, people’s work and life are intertwined, and the isolated patterns of behaviour are unsustainable, and replaced by complex activities. Therefore, the high-speed rail station is no longer just a hasty stop, but a comprehensive transportation hub integrating business, leisure, entertainment and service, thus opening up a new lifestyle for the contemporary people.

As a transfer center, the station square of Tonglu High-speed Railway Station also has functions such as light rail train station, county-to-township departure point, bus departure point, tourist bus and taxi connection area, thus achieving the zero distance transfer between the city and the county. Through the analysis of the overall traffic line, the separation of pedestrian traffic, vehicle traffic and bicycle traffic is realized, which is the first attempt of China’s county-level city.

Different from the traditional station mode, the project opens up an exuberant and staggered green valley in a noisy environment. It makes full use of the roof of the earth-sheltered architecture to externalize the indoor environment. The slow traffic system formed by the two wind-and-rain corridors and landscape greenway from the station building is connected to the city as an important landscape node of the High-speed Railway New City. The featured landscape on the station square also controls the spatial relationship and rhythm of the site. All these have broken the stereotype of traditional station of “coming and going in haste”, and the role of complex public space makes passengers slow down and perceive the most beautiful high-speed railway station in China in the miniature Fuchun landscape.

Traffic is the source power of urban development, which has a decisive influence on the flow of production factors and the development of urban system. Today, with the increasing social material needs and ideological energy, the high-speed railway station will also get rid of the shackles of the distribution function and create a space value with enormous economic power. As the gateway to Tonglu, the Tonglu High-speed Railway Station project has shouldered the mission of displaying the urban features, stimulating regional vitality and creating space value, officially ushering in the 2.0 Era of China’s High-speed Railway New City. 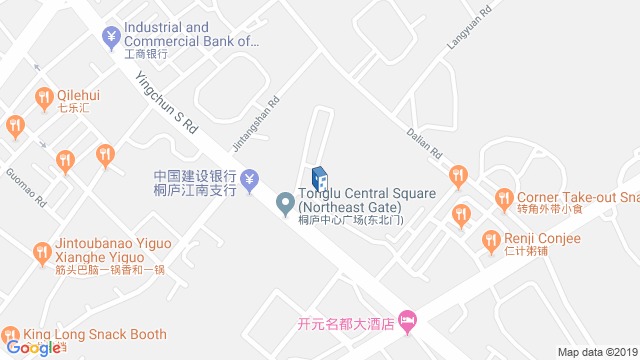 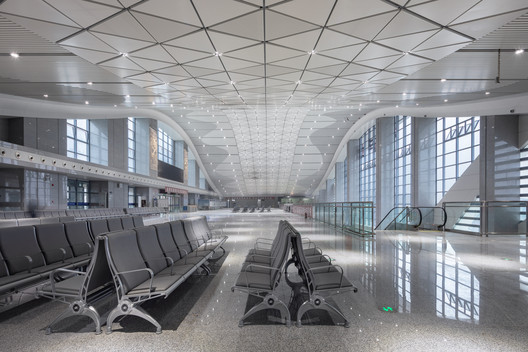 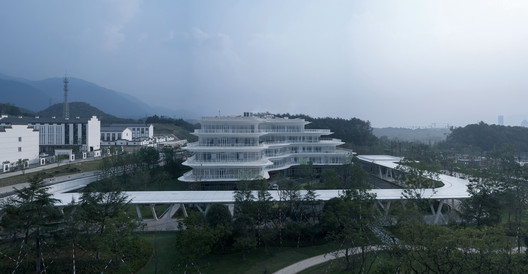