Save
Designers Imagine Bamboo Colony on Mars
Share
Or
Copy

Designers Warith Zaki and Amir Amzar have imagined a project that seeks to find alternatives to traditional construction material in order to build the first settlements on Mars. In fact, they opted for a natural earthy element that competes with wood, brick and concrete, and drafted a project that uses bamboo. 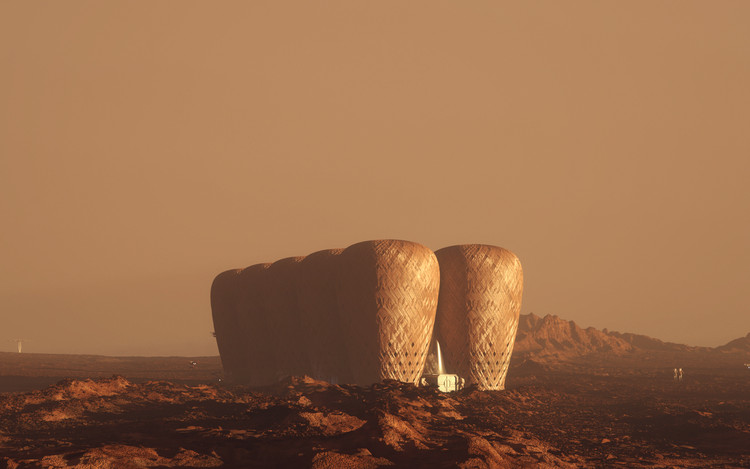 The project entitled Martian S.O.L- Seed of Life, started by questioning what kind of material can be light enough to be transported to the red planet and grow to a greater mass once it arrived. In fact, the bamboo plant can withstand the harsh Martian conditions, and extreme instabilities in temperature, without requiring any pollination circuit to reproduce. Moreover, a plant is very likely to grow at an increased rate on Mars because of the abundance of Carbon Dioxide in the composition of its atmosphere. Also efficient as a food source, Bamboo was ideal as an alternative for construction materials on Mars.

The idea of transporting construction materials to Mars is a gruesome thought, conventional building materials would be too heavy to be lifted off out of our atmosphere with rocket engines, even the lighter materials would be too costly as it might compensate to higher volumes for it to be enough to build a shelter for a colony of 50. In 2017 Elon Musk quoted a cost of USD140,000 per tonne to Mars. There is an idea of completely 3D printing houses out of Martian regolith, although that seems to be the better solution among other proposals, there is no knowing what are the unknown challenges that might occur in transforming the regolith that is filled with hazardous Perchlorate into a reliable construction material. This project seeks for an alternative on construction material on Mars. -- Warith Zaki and Amir Amzar.

This reasoning led the architects to develop the vision for a first colony on Mars, on a site “located at the southern part of Elysium Planitia where satellite studies have indicated pack ice found on the ground surface, a possibility of frozen water underneath.” Read on to discover the timeline of the installation of the project, provided by the designers.

1.The first small team of explorers arrive at the southern part of Elysium Planitia to find underground frozen ice. Once confirmed, the team sends a signal back to earth to begin colonization process.

4. Walls are autonomously unfolded and put into place by robotics. Mini-magnetosphere at the core provides shield for the bamboo from cosmic radiation. Ground drill is used to retrieve frozen ice from below grade to feed the fast-growing bamboo.

5. Bamboo grows to full height and are taken out from the growth chamber. Using earth’s traditional technique, drone robots weave the cut bamboo around ETFE membrane.

6. Liquid water is pumped into bamboo, water freezes under Mars’ outside extreme temperature, creating a natural structural reinforcement. The frozen ice inside bamboo provides a second layer of protection against cosmic and solar radiation. Ground robotics sinter Mars regolith around bamboo footing to create subgrade base that could withstand Mars-quake. A research conducted by NASA indicates that the density of the Mars atmosphere can allow solar transmission up to 30º above the horizon. Therefore, few windows are placed in the lower facade area that opens up to the Mars’ vista and the greenhouse.

7. Multiplication of the habitat allows the shaded volume underneath to be transformed into a pressurized greenhouse via sealing with ETFE membrane. Ground robotics excavate the floor soil to be treated in a nearby facility to eliminate the hazardous Perchlorate content found in Martian soil, while drone robotics 3D print HDPE(High-density Polyethylene) for air-tight sealing at junctures. HDPE can be made from in-situ materials of CO2 and water.

8. After 4 years since its inception with the monitoring help from the first explorers, the hybrid habitats are ready for their first colonists to arrive. These 50 persons are comprised of scientists, builders and miners to help lay foundation into the Martian society and economy. Pressurized greenhouse made of ETFE allows for separate climate control. Some sections could be used for growing food such as potatoes, the other sections could be used for botanical experimentation especially growing the high-altitude trees that are found in Pico de Orizaba mountain in Mexico that are believed to be able to survive Mars atmosphere. 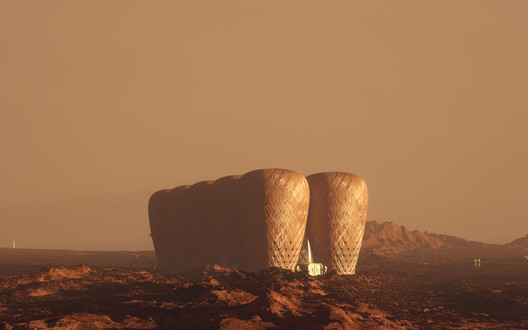