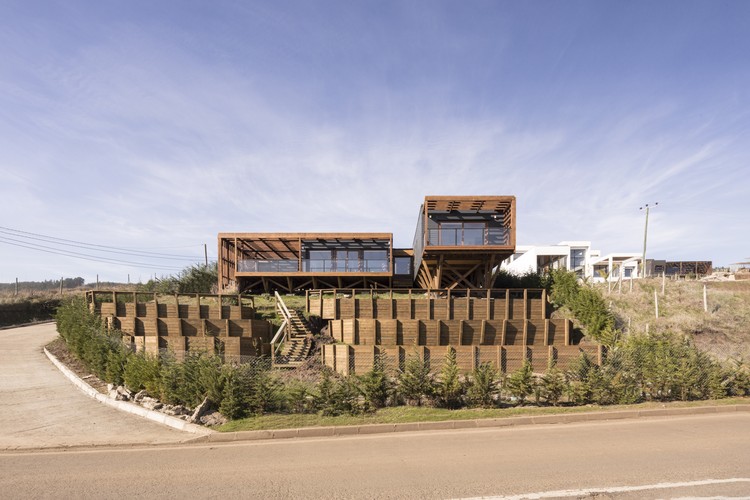 Text description provided by the architects. Sol House is located off the coast of Pelluhue, one of the growing popular beaches of the southern scepter of Chile. The project is located in a small corner lot, it has a pending mark that goes down towards the sea, ends in a winding vehicular route that separates the land from the coastal edge, generating a clear physical limit. The formulation of the project seeks to vanish this physical barrier, rising and projecting virtually on the road, taking as a boost the slope of the land. In this way it rises and connects spatially with the horizon line and the blue of the sea, this being the fourth figurant of the project.

The house consists of two perpendicular and separated pavilions, crossed and contained at the same time by a third sifted body of the wood. Access the upper and back of the land, entering a tight volume that articulates the large pavilions, from this space the sea appears as a framed postcard. In the long pavilion perpendicular to the beach line, private activities happen. This volume defies gravity and projects towards the sea, such as opening over the road.

While, in the volume retracted and parallel to the sea, the public activities of the domestic event happen, it rises over massive wooden crossings, debating against the slope of the land to approach and align with the horizon line, they are also in an area of patio between both boxes. This elongated space of large windows turns the exterior to the interior, dilutes the physical limit, bringing the sea inwards. Complementary to the social volume, a third semi-open volume composed of a thin and elongated plot, which folds into walls and sky, forming the terrace.

Generating a contrast in terms of texture, color, and movement with the rest of the volumes. This space shows through its multiple textures the passage of the sun during the day. The structures of the shadows on the textures coverings play and merge, generating a new interior experience that varies in tones and patterns. A seat floats on the terrace, evoking the space of contemplation, where you can feel the temperature of the sun, sea breeze, sound of the waves and colors of the place.

The large structure that supports the living spaces dialogues with the sieved volume and the set of staggered terraces, reaching a high prominence from the external pedestrian and vehicular view. The direct relationships between the natural and the built, between the near and far, respond to the complexity of elements on the ground. The interior spaces treated with white water reveal the grain of the wood and increase the contrast with the seafloor from the inside. While on the outside the intermediate and semi-open spaces mediators with the interior space as a terrace and terraced corridors contrast with the gray pavilions.