“50 years ago, in 1969, the John Hancock Center was opened. In that same year architects Walter Gropius and Mies van de Rohe, leading figures of the modernist movement, passed away. Their designs and innovations in the previous decades paved the way for Skidmore, Owings and Merrill, along with Bruce Graham and Fazlur Khan, to conceive the Hancock Center, contributing greatly to Chicago’s impressive skyline. [..] The building was designed in the structural expressionist style. The X-braced exterior became the defining feature of this iconic figure in Chicago’s ever evolving architectural identity.” -- Ste Murray, photographer

The building is famous for its massive exterior structural X-bracing, the signature of the John Hancock Center. The photographer has put together a series of photos showcasing this amazing structure, after half of a decade in place.

“When I was a child, long before I studied Architecture, I used to crudely copy pictures of buildings from different books into a sketchbook. I remember drawing its distinctive X-bracing facade down onto the page; echoing the external structure as it itself expressed the loads it was carrying. As it celebrates its Golden Anniversary, I took a trip to the Windy City to see this icon in its various lights. Camera at the ready, I was inspired by high contrast and formal work by the likes of Ezra Stoller and Trent Parke. I hope this series serves as a subtle tribute to this gentle giant in its golden year.” -- Ste Murray, photographer 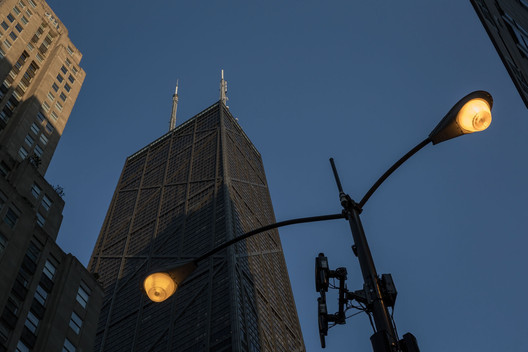