Victoria Lautman, the LA-based journalist, started taking pictures of stepwells in India, thirty years ago, collecting images from all over the country. The Fowler Museum at UCLA is exhibiting nearly fifty photographs of these water-harvesting structures, till the 20th of October 2019. 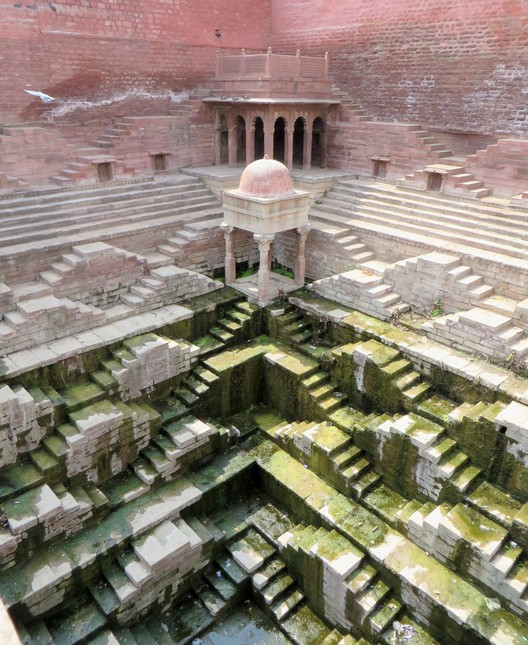 Built from 600 C.E, mainly in India, the stepwells are actually structures that help harvest water. Victoria Lautman became obsessed with these vanishing architectural elements, taking countless images and publishing her book in 2017, The Vanishing Stepwells of India (Merrell, London). In fact, most of these stepwells, also known regionally as baori, baoli, bawadi, and vav, are abandoned, forgotten and are not a familiar destination with tourists or with locals. Only a handful have been preserved and maintained, including the 11th-century rani ki vav in Patan, Gujarat, which was selected to be a UNESCO world heritage site in 2014.

Although their main purpose was to provide daily water supply, stepwells had many other functions such as subterranean temples, desert oases, pleasure retreats, and civic centers. They extend down to the water table and can project as many as thirteen stories into the earth.

These upturned staircases are wonders of architecture, engineering, and art, encompassing a wide range of sizes, styles, and materials. The exhibition entitled India’s Subterranean Stepwells: Photographs by Victoria Lautman that has been running since May 5th showcases these inverted edifices until the 20th of October.