The Practice for Architecture and Urbanism (PAU) has unveiled the design for two new towers at Philadelphia’s Schuylkill Yards. PAU was commissioned by Brandywine Realty Trust in collaboration with HDR Architects and Drexel University for one of the most important urban revitalization sites in the United States. As the first high rise structures in PAU’s portfolio, JFK Towers mark the first phase of the Schuylkill Yards project. 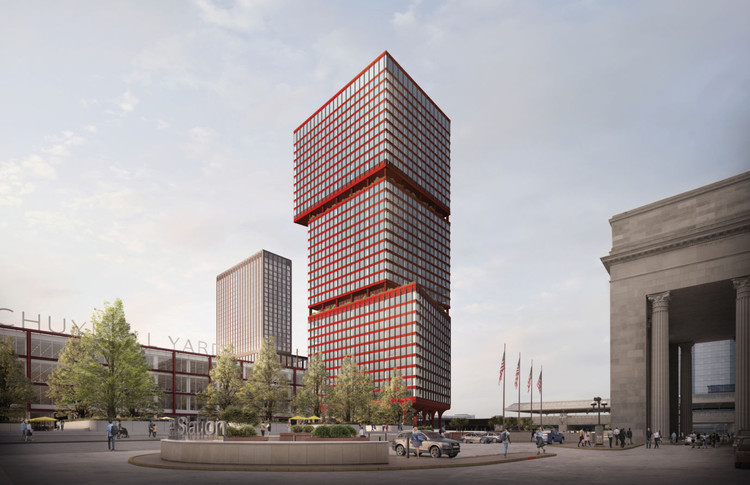 Schuylkill Yards is a 14-acre redevelopment of underutilized sites located between Center City and University City along the banks of the Schuylkill River. Schuylkill Yards is within a twenty minute walk of academic, cultural, medical, municipal, open space and business resources, all centered on Philadelphia’s 30th Street Station. The team designed the towers to bridge Philadelphia’s rich history with its burgeoning knowledge-based future.

The two mixed-use towers are sited adjacent to 30th Street Station along JFK Boulevard. The two buildings will house over 1.5 million square feet of transit-oriented office, residential and retail space framing a new one-acre public space designed by SWA Balsley. The two towers will be connected by the High Line Plaza, a new public space that will feature a variety of plants and social seating arrangements, a water feature, and provide space for programmed community events. The massing of the taller East office tower was made to create a dynamic tri-partite volume that flips symmetrically. The 512’ tall East Tower provides 34 floors of office space, 6,600 square feet of retail space, and an amenity floor. The massing of the West tower, which houses both loft office space and approximately 300 rental apartments, is designed as a set of orthogonal forms; these urban scale architectural moves culminate to form a negative space between the towers that gives figure to the public realm in both plan and section—in both the street and the sky—around the active rail viaduct.

The expression of the buildings was made to celebrate the diverse architectural heritage of Philadelphia through color, texture and light. The neutral colors of the West Tower mirror the area’s beige brick and limestone context, while the distinct red sandstone color of the East Tower extends the coloration of the Fisher Fine Arts Library designed by Frank Furness; the color weave of the East Tower facade offers a modern interpretation of Philadelphia’s extensive use of red and gray brick as well as the bright red metal rail cars that once traversed the Yards. The work of Furness also informed the arches at the base of both buildings.

News via Practice for Architecture and Urbanism 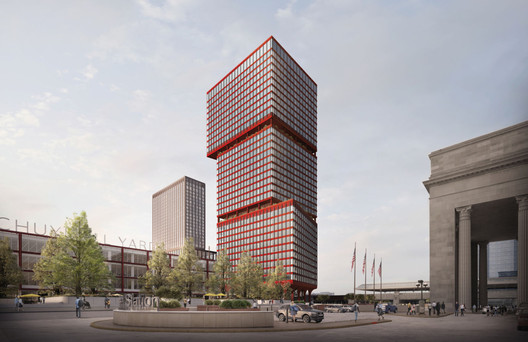