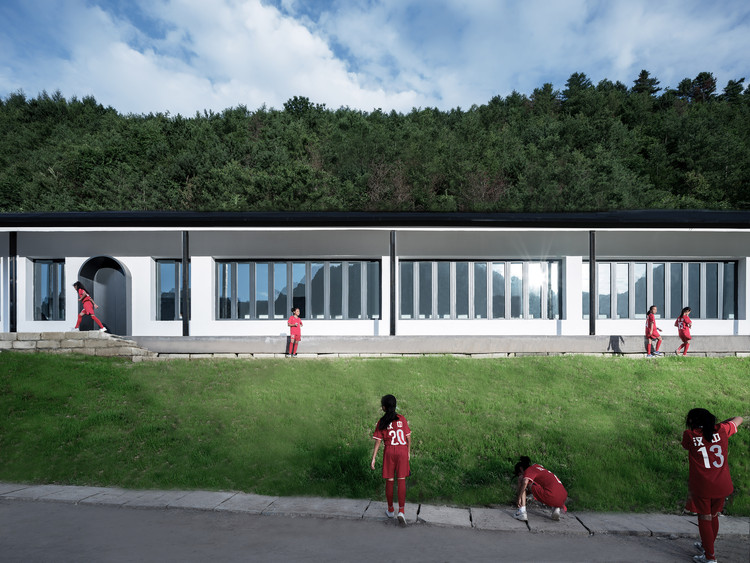 * The EKATO-METER CAFETERIA is named in honor of the Greek’s First Olympics, εκατό = 100.

SOCCER VILLAGE
The EKATO-METER CAFETERIA is located in LIUBA, a beautiful valley in the QINLING mountain region. With a history of over 2,000 years, Liuba was once home of the most well-known General Liang Zhang from Han Dynasty and later become one of the battlefields during the Three Kingdoms. It has surprisingly also grown to become a popular place of soccer programs for kids and young adults, with which STUDIO QI has been associated with the planning and architectural design for the new soccer village, consisting programs such as a local school from K-9, athletes’ dormitory, and various public spaces to support the undertakings of sports scene in the historical heritage site.

133 METERS CAFETERIA
The Cafeteria was one of the first public structures designed and built for the soccer town. The location was picked from where once was horse stables, an extremely narrow and linear site sitting against the hill front. The cafeteria unfolds its frontal elevation to a length of 133 meters; in contrast, the short facade displays an image of a local house with pitched roof. The cafeteria is designed to accommodate up to 400 people to dine together, soccer trainees, athletes, coaches and families.

ARCHITECTURAL SPACE & ARCHITECTURAL ROOMS
To combine or to sparse, it’s a challenge when dealing with the extremity of the building form. By stretching the rectangular form to the boundaries of the site, the design strategy is to emphasis the characteristic of linearity to all extends. The cafeteria is divided in the long side into two halves, the SPACE and the ROOMS. The SPACE refers to the single continuous and main dining area that vanishes end to end of the gable walls; while, the rest of the programs such as kitchen, serving and private dining rooms are tucked within the back linear zone of the ROOMS. Together, the SPACE and the ROOMS with their distinct spatial features, assist the smooth procession of the daily dining routine, especially when young athletes rush into the cafeteria after hours of training.

Outside the Ekato-meter Cafeteria, young athletes have the opportunity to hang out at the triangular-shaped steps. The steps are the extension of the topography of the hill, and connects with the parallel corridor underneath the eave. Five entrances are equally distributed along the front façade. The arch-shaped doors and color coated glass windows bring vivacity to the space. The gable roof is covered with black lightweight steel sheet, translating vernacular tiles into the subtle modern architectural language.

HUNDRED-FAMILY BANQUET: STREET AND HOME
The "Hundred-Family Banquet" festival of China is listed as a UNESCO Intangible Cultural Heritage, a phenomena where everyone in the village lines up tables in the alleyways and dines together to celebrate Chinese holidays. Such cultural phenomena is also referred and pictured within the Ekatometer Cafeteria. The dining tables are set end to end in the continuous space, spanning the entire length of the building. Memories of Chinese “Hundred-Family Banquet” are portrayed as everyone sits alined and enjoys the meals with laughters.

A row of skylight windows is introduced to the SPACE, referencing the line of daylight shining through the street. The windows let in the natural light during the day and cast warm light from inside out back to the village in the evening. The street becomes a house after the roof is added. The gable roof is designed asymmetrically in section, as the ridge and skylight windows become visible in the main dining area. Young athletes, thus, can easily recall the shape of a house and engage the feelings like home.

The Ekatometer Cafeteria challenges the stereotype of a typical Chinese institutional cafeteria to be massive and alienated. The architecture captures the disproportional characters of site dimensions and turning such difficulties into a reading of vernacular buildings; representations of acquaintance, intimacy, and pleasure of the village and home are thus revealed again. The Ekatometer Cafeteria opens both to the residents of the village and all visitors. Just as the “Hundred-Family Banquet”, this cafeteria shall be a place for each and every one. 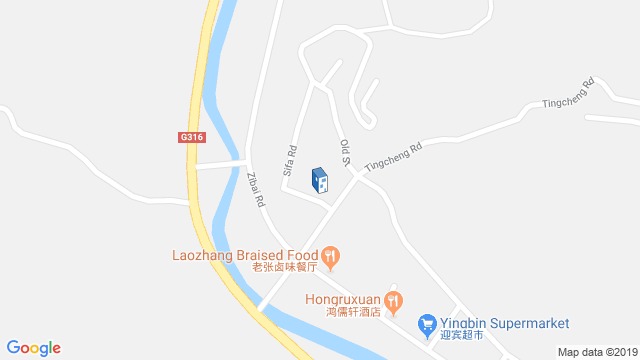 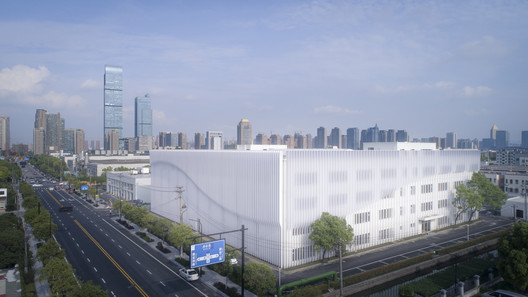 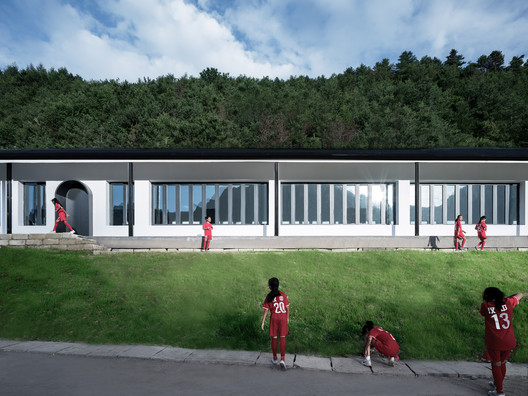