Save
House in Arada / Nelson Resende 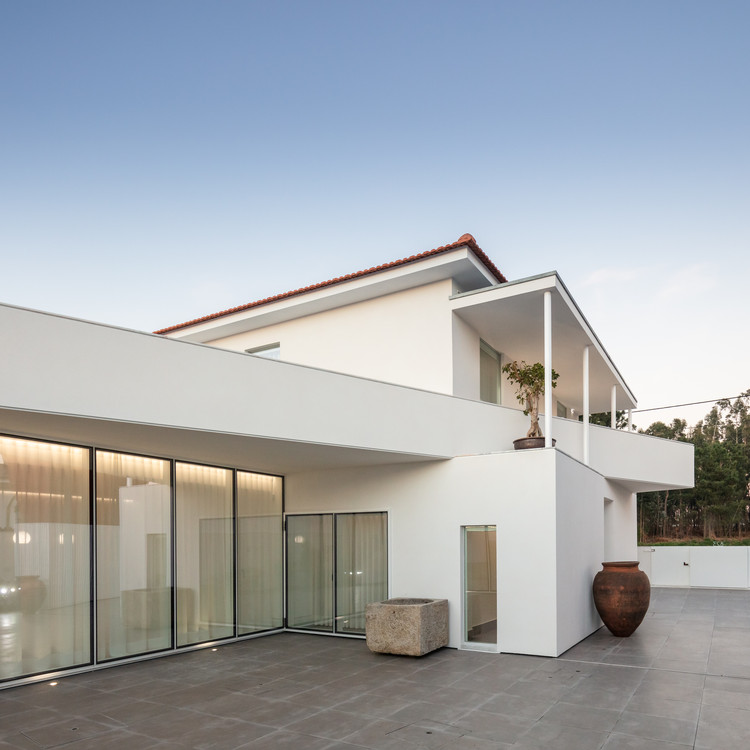 Text description provided by the architects. The project is located in the street of the New Road, in Arada, a street with adjacent constructions relatively consolidated, in a central link between the chapel of Nossa Sra. Do Desterro and Parish Church of Arada.

The house, with some decades of existence, was gradually adapted, having a natural and additive reorganization of support structures, small built spaces that, throughout the life of the property, allowed the creation of conditions of use adapted with the life of its owners.

The rural activity by then, changed the built spaces, based on the need for a free passage from an access road, on the East, to the backyard on the opposite side, the West.

The transformation of the dwelling is in accordance with the requirements listed below:
- total demolition of the spaces covered and also of the support spaces, annexed to the main volume of the initially built volumetry;

- Partial reoccupation of the space that deals with the part of the support plants, near the North limit of the land, maintaining a functional organization of the house supported in an installation near the blind walls of the neighbors but with the intention of providing a preferential solar exhibition of the constructions to the south, east and west;
- demolition of the exterior access staircase to the upper floor of the dwelling;

- functional reorganization of the dwelling, transferring all the common use program, such as living rooms, kitchen and support room to the lower floor (dwelling and annex) and a use of the upper floor that changes to the private uses such as the bedrooms and sanitary support facilities;
- creation of outside spaces covered to support, at the lower level, the laundry, the kitchen and the living room, as well a balcony on the upper floor, for functional interrelations with the bedrooms;
- creation of different outside support spaces, differently drawn trough a certain hierarchy of uses, such as the access patio, patio for longer use, patio and garden area;

- removal of constructive elements of lower quality in the previous construction, to recover with a more careful image, to be coherent with the modern construction;
- development of a certain duality in the interpretation of the relation between the existing elements, to improve and the new elements, to create, assuming a new interpretation, confrontation of languages ​​and forms and trying to keep a sense of material and constructible truth in the new proposed spaces.

The house still keeps the previous scale, even with new parts added, and it reintroduces a functional logic that fits the new expectations of use.

The new image, serene and visually not very contrasting, it is subtly challenged by the angularity of the new geometries that try to draw a kind of conducting wire, through elements such as slabs, blades and porticos, juxtaposed that are to the volume of the two floors that we kept, even provoking a certain tension and mixture, without knowing for sure what resisted or what was added, avoiding a more obvious and more dualistic explicit solution between the old and the new.

Then the light in the various surfaces constructed brings a dynamic, changeable and surprising reading, according to the hour of the day, or with the season in the year, becoming a stripped design, valuing the spatiality by assuming the games of light and form instead of assuming its richness by the material qualities or price.