Save
Burning Man's ORB Through the Animated Lens of Another :
Share
Or
Copy

One of the main attractions of 2018’s Burning Man Festival was the ORB, designed by Bjarke Ingels, Iacob Lange & Laurent de Carniere. The inflated spherical mirror was created as a conceptual representation of Earth and human expression, leaving no trace after its deflation. The project consumed 30 tons of steel, 1,000 welding and sewing hours, and $300,000 of personal funds to make the ORB come to life.

As part of their mini-film series, creative duo another : have collaborated with music composer Yu Miyashita and released a short video that explores the process of creating the ORB in an otherworldly way.

The Burning Man Festival takes place every year in Black Rock City, Nevada, a flat semi-dry land of deserts and canyons. The spacious site leaves room for architects and designers to create installations that explore various materials and forms. In the video published by Another :, the artists captured the dry, rigid sense of the site, along with the ORB's celestial appeal.

Photographer Laurian Ghinitoiu and filmmaker Arata Mori have combined their visions and expertise in the field of visual arts and started another :, a unique approach to architectural display that merges film, art, architecture, and space.

Burning Man has revealed the design for the 2019 Festival, created by Geordie Van Der Bosch. The design, titled The Temple of Direction, is inspired by the Torii gates of the Fushimi Inari Shrine in Japan, and consists of wooden archways that form a linear passageway to the central hall. 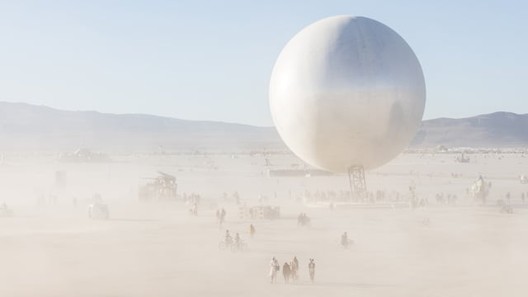