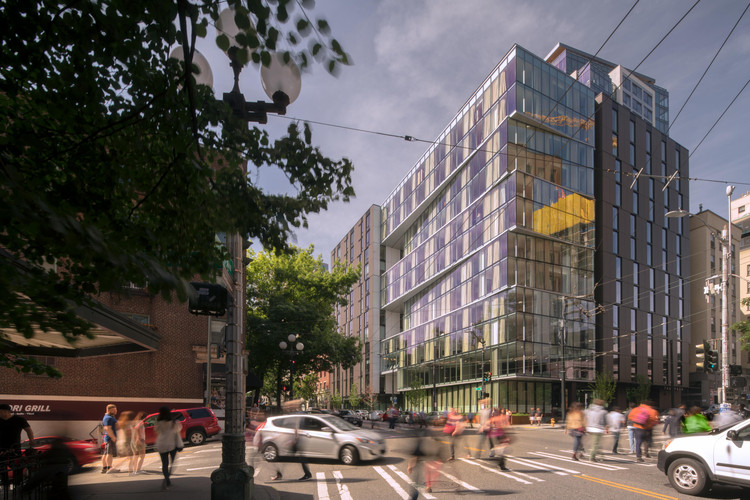 “It was an honor to work on such an important corner and intersection in Seattle. The project is adjacent to one of the city’s most important cultural institutions – Pike Place Market – and so even today with all the changes Seattle has experienced, the area still carries a little of the Seattle I recall when I moved here in 1974.” ―Tom Kundig, FAIA, RIBA, Design Principal

Located in the heart of downtown Seattle, 100 Stewart Hotel & Apartments serves as a contemporary landmark that visually and physically responds to the surrounding urban context. The site is situated adjacent to the historic Pike Place Market District and is neighbored by a range of buildings that represent Seattle’s rich history. For that reason, one of the primary architectural considerations of the project was the scale of the new structure and its relationship to smaller, older buildings in the surrounding area. The site’s position at a major axial grid shift also presented a unique opportunity to mark this significant intersection and act as a gateway between neighborhoods.

The building is composed of two primary elements that break the expression of the structure: a focal point “glass lantern” with geometric shifts that physically mimic the street grid alignment; and the adjoining frame of solid façades that provides a visual counterpoint.

Drawing from its surrounding context the building features an interior courtyard that offers a quiet, protected area as an entry point to the hotel. The Pike Place Market District has a pattern of existing pedestrian circulation through courtyards and alleys that evoke a sense of wander and exploration. The 100 Stewart courtyard endeavors to connect the building to these pedestrian pathways in addition to serving to bring in natural light, air and ventilation. Punched openings higher up in the structure also allow people to see into the building, invoking a sense of visual accessibility.

Aside from the glass lantern element, the building’s street facing structure is an integrally colored cement panel façade system that fits with the surrounding historic brick buildings. Finishes within the courtyard are light and white to create more reflectivity.

Conceptually, the building is denoted by both introverted and extroverted spaces, while the iconic glass lantern is symbolic of the hotel’s relationship with Seattle, the Pacific Rim and wider world―it serves as an inviting and luminous entity. 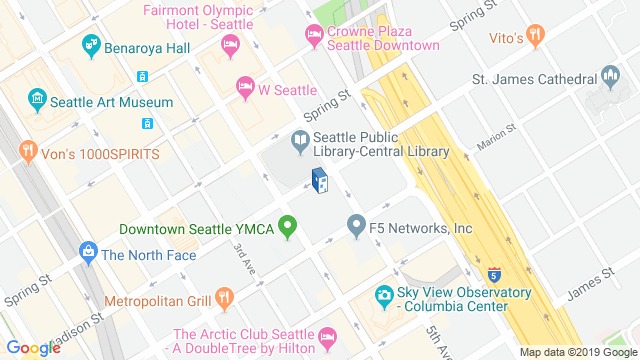