The 6th edition of Passages Insolites or Unusual Passages, has kick-started from the 20th of June till the 14th of October 2019, in Québec city. The public exhibition is a 4km walkable art path in the historic Petit Champlain and Saint-Roch districts, showcasing 14 artworks produced by 40 local and international artists and architecture collectives.

With the purpose of exploring the city from a totally different perspective and breaking the monotony of the urban space, EXMURO arts publics, an NGO that curates art projects in public spaces, creates this annual tradition for the Canadian city. The art path, curated by Vincent Roy, and presented by the Ville de Québec, is a free of charge walkway, inviting people to discover the artworks on display and re-experience the streets and the urban components of their city with a new perception.

In addition, they have also launched a special program that allows these interventions to travel to cities around the world, 4 works have been shown in Longueuil, Québec and 3 will get to travel to Philadelphia’ s Flow exhibition in October.

A metal gate constructed from security fences marks a fictitious border. The openings present seem to have been forced. This barrier appears austere and intimidating, but a closer look reveals handcrafted ornamentation, which makes its presence less intimidating while sowing doubt about its true function. BGL has created an ambiguous work exploring the precarious balance between the need for control and freedom, between following the rules and letting loose.

Reflecting the diversity of people who take part in the project (R)ASSEMBLER (Togetherness), a range of hybrid bodies inhabit the installation space, covered in small elements from “hexagon-spangles” to everyday objects that are crafted at public workshops—the fruit encounters between artists and participants. Dreamers’ Echo grows out of an inclusive, sensitive co-creation experience where everyone gets the chance to get their hands dirty and collectively create a maelstrom of matter and memories.

Who said history can’t be fun? Consortium 19 literally makes history into a game by “putting into play” a large cast of characters and milestones of Quebec’s history. Players can create new clashes between characters in a video game, try to win a stone fragment from a now-destroyed historic building, recreate the story of Alain Côté’s famous air hockey goal, or join a canoe race pitting eminent figures from the history of Quebec against each other. This piece promises a truly historic level of fun!

Is this giant sphere rolling down the alley, or purposely blocking it? Its shape confronts the straight vertical lines of the surrounding buildings, despite the illusion that all are made of the same material, brick. While the mosaic pattern recalls this favorite building material of the 19th and early 20th centuries, its shape clashes with the straightness of the buildings, adding a contemporary touch. Dare to approach and walk around the work: its relationship to the human scale just might give you vertigo.

The scene seems absurd: two inflatable clown heads stuck between building walls. Compounding the strangeness, the figure of the clown—an object of mirth—takes a turn for the disturbing, depending on our point of view and our level of sensitivity. The title Endgame (Nagg & Nell) refers to the Beckett play in which two characters, Nagg and Nell, live out their days in a dumpster after losing their legs...

Walkthrough the portals to discover a colorful world concealing a critique of our relationship with nature: artificial vegetation, industrial agriculture, sanitized food, and a dehumanized restaurant industry. Put together, it portends an uncomfortable future distorted by human efforts to exercise extreme control over the environment. Is this the inevitable endpoint of efficiency, or a sign of impending disaster? 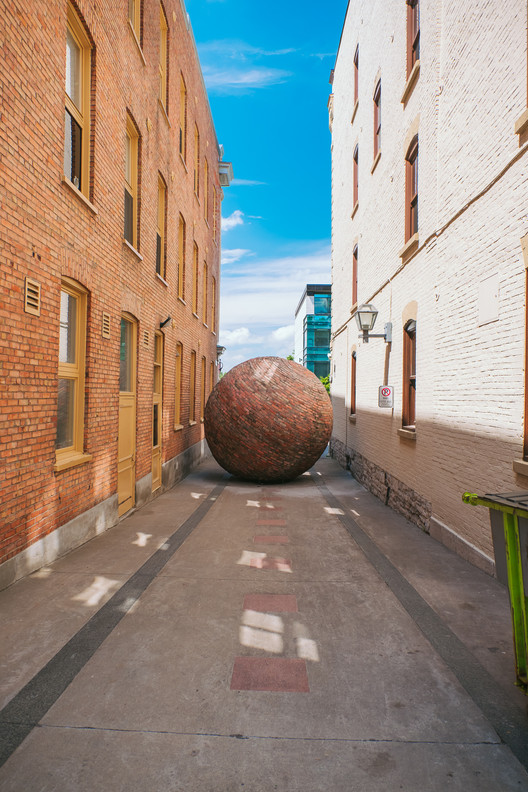