Text description provided by the architects. Casa Morgana is somewhere else. Surrounded by neighbouring homes dating from the late nineteenth century, the building is like a study for possible future architecture and seems to have fallen out of context. Surrounding nature simulates a subtropical oasis and locates the residential sculpture between optical disturbance and atmospheric displacement.

The three-story building consists formally of several differently sized cubes placed at staggered levels on top of one another, connected by a central stairway. The existing building from 1972 and its annexes from 1991 were reduced to their shells and then retaken with targeted interventions: not as a cosmetic make-over, but as a location that distils and continues the archaic and brutalist aesthetic from the time of the building’s original emergence.

The cubature of the building was focused upon with architectural additions of exposed concrete and the partial removal of ceilings and walls. Staggered floors and different room heights create vertical links and manifold sequences of rooms. The cubic house creates a large residential landscape in its reduced, furnished interior. Separating elements between the individual areas are formed as poché rooms and take up different functions. The mirrored walls reflect the exposed concrete, the terrazzo installations appear like cuts through the concrete walls and expose the inner structure of the material. The roughly improved already existing concrete walls also create a hybrid of reduction and projection.

Towards the street and the side plots, the building seems closed and avoids neighbourly proximity. It is only towards the garden that it turns its monochromatic interior toward the lush greenery. The large glass pivoting doors open the entire living area into an oasis of bamboo, tree trunks, palms and mushrooms designed by the artist Tita Giese. 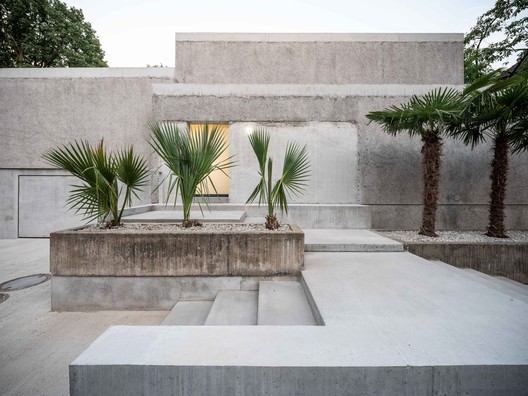