Save
Architect’s Living in a Watermill / DEBYT 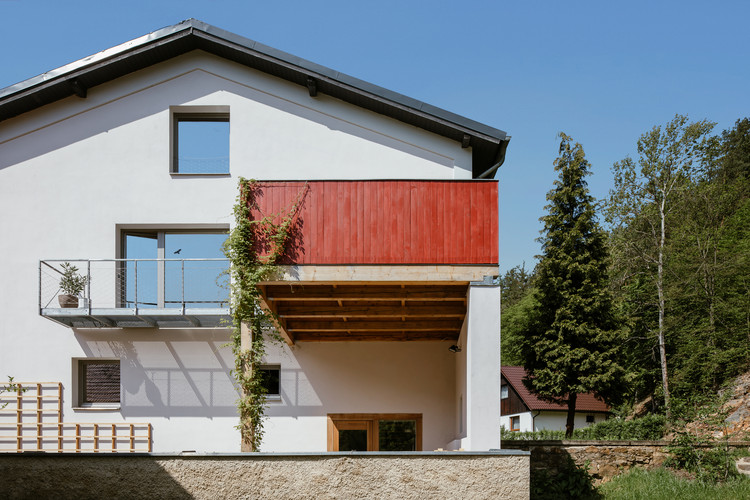 Text description provided by the architects. The starting point for his own living of the architect was a partially renovated watermill building, a former paper factory, found in the preserve in Křivoklátsko – part of western Bohemia (Czech Republic/Europe), in the valley of Zbiroh stream. The opportunity to habitat the smaller part of the building was only viable under the condition that the outer character would respect the earlier renovation.

The mill room itself essentially functions as a “two-in-one” house. The inner vertical dividing wall, which up until the addition in the 1940s was in fact the gable wall, separates the new living unit from the older one, which houses the architect’s wife’s parents. The units are for practical reasons interconnected via souterrain and on the second floor, without compromising privacy.

From the beginning, the main intent was to follow through with the industrial character of the building, mainly by preserving the large open spaces with original timber beam constructions on each floor. The individual floors fulfil the function of a children’s room with a dressing room and a bathroom on the slightly elevated ground floor, a living room with a kitchen on the first floor and a bedroom, a study and a bathroom in the attic.

The space designated for renovation is more reminiscent of a tower than a house. Given such prominent vertical arrangement of the space, the skylight-lit staircase serves as the main integrating tool.

The mentioned staircase is situated at the northern façade, and is, in the upward direction, increasingly brighter and increasingly more connected to the individual floors. On the ground floor, the staircase is completely separated from all living spaces by thick walls, on the next floor it is more interconnected thanks to a glass partition and on the last floor, the staircase naturally merges into the attic study which looks like an open deck. The motive of the design is a journey towards the skylight, as well as maximising the inhabitation possibilities of the staircase.

Exterior modifications are focused mainly at the eastern gable façade, which has been prominently modified. Large windows have been added, as well as a terrace at the same level the kitchen is situated. The terrace is accessible by an interconnecting bridge and offers enchanting views of a small rockery and the open valley of the Zbiroh stream. The erection of the terrace has also enabled the roofing of the entrance area, which serves as the traditional “doorstep” space.

The design has preserved the industrial and at the same time rural character of the exterior as well as the interior. Material-wise, mainly wood, metal, stucco plastering and cement coating have been used. The building has been treated with regards to ecology and with the effort of maximal utilisation of all that already existed. All wood as well as timber beams from the original structure, as well as all other gathered timber that has accumulated over the years in the settlement have been used not only as construction members but also in the interior.