Save
Day-VII Architecture: How the Architecture of Polish Churches Developed in a Secular Socialist State
Share
Or
Copy 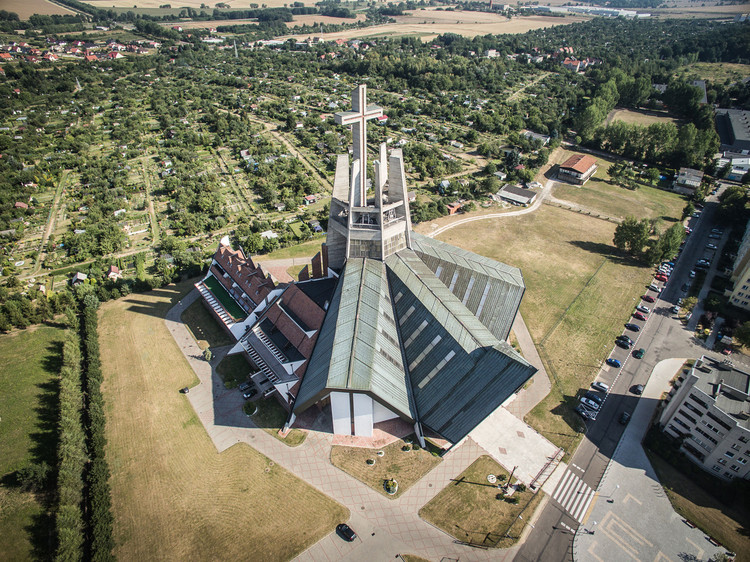 In the mid-to-late 20th century, a secular, socialist Poland served as the backdrop for the construction of thousands of Catholic churches. In their book Day-VII Architecture, Izabela Cichonska, Karolina Popera, and Kuba Snopek analyze the paradoxical facets of this architecture born at the intersection of secularity and religion, charting how its development was influenced by liturgical reform, political movements, and the growth of postmodernism. In the excerpted introduction below, the authors unfold this history, touching on the Second Vatican Council, Solidarity, the Iron Curtain, and more in relation to the development of Day-VII Architecture's ultimately unique postmodern style. The publication has collected photographs of 100 Polish churches built after the year 1945, accompanied by interviews with their architects. To read more about the authors' original Day-VII documentation project, which served as the groundwork for this book, be sure to visit the original article "These Churches Are the Unrecognized Architecture of Poland's Anti-Communist 'Solidarity' Movement."

Over 3,000 churches were built in Poland between 1945 and 1989, despite the socialist state’s hostility towards religion. We call this Day-VII Architecture. Built by parishioners using materials that were scavenged or pinched, the churches were at once an expression of faith and a form of anti-government protest. Neither legal nor prohibited, the building of churches in this period committed the most talented architects and craftsmen, who in turn enabled parish communities to build their own houses of worship. Day-VII Architecture emerged against the backdrop of a unique combination of political and social circumstances and is the most distinctive Polish contribution to the architectural heritage of the twentieth century.

[...] Arising at the intersection of two mutually exclusive value systems – a secular socialist state and a deeply devout, Catholic society – the form of each church was always a result of both devotion and protest, aspiration and fear, intransigence and collaboration, tradition and precursorship. Each of these churches is unique, an impossible figure that combines distinct visions of society into a single, paradoxically coherent entity. Drawing on a number of interpretations of modernity from both East and West that intersected on the territory of Poland, the architects of the churches created, together with parishioners, new and absolutely unique architecture.
[...]

Between 1962 and 1965, at the height of the space race, the Church convened the Second Vatican Council, a wide-ranging attempt to reform its structures in the face of rising popular culture, mass society and consumerism. The aim of the Council was to stem the loss of churchgoers and the method it chose was to reform the liturgy. The key term used in the Council documents was ‘community’. The Tridentine Mass – a mystical spectacle conducted in Latin with a priest standing with his back to the faithful – was replaced by a mass resembling a meeting of the faithful. Conducted in a local and therefore comprehensible language by a priest facing his people, it aimed to unite and strengthen ties in the local community.

In a way, the Council revolutionized church architecture by chance. The bishops gave no indications as to how the art of building churches was to change; they focused solely on liturgical reform. And yet, the liturgy – the essence of what happens inside the church – is inseparable from its architecture. Every modification, every change in the rite of mass or position of the priest, sparks a chain reaction of fundamental spatial transformations. The post-conciliar mass obliged changes to be made to the spatial design of churches, to their lighting design and to the interior details. The spatial revolution that the architects carried out was thus a by-product of the Second Vatican Council.

In Poland, the implementation of these conciliar changes went hand in hand with a great deal of improvisation. The new rules being introduced at the peak of Cold War, the flow of information to the other side of the Iron Curtain, information concerning both liturgical changes and their interpretation in church architecture, was often delayed and fragmentary. Moreover, Polish architects, unlike their colleagues in the West, were simply not equipped to design churches. Socialist schools of architecture did not teach church design and there was a lack of relevant literature. Eastern European editions of Ernst Neufert's Architects' Data were even shorn of its chapters on sacred architecture. As a result, architects in Poland often had to look to unorthodox sources of inspiration, such as theatre design.

The biggest wave of church construction was triggered by a political event, namely the general walkouts organized by Solidarity in August 1980. Solidarity – a workers' movement calling for reforms to the socialist system – found strong support in the Catholic Church and among the intelligentsia. In the aftermath of the Solidarity strikes, the government, among other things, made concessions to the Catholic Church. In order to alleviate the revolutionary mood, the communist authorities began to issue previously unavailable building permits to build churches. These concessions were, however, merely apparent. Nominally agreeing to the construction, the state did everything in its power to sabotage these projects. It allocated plots of land ill-suited to building; construction equipment, fully controlled by the state, was not made available; and there was no access to building materials, all of which were owned by state companies.

This turn of events meant that churches had to be constructed by parishioners themselves. Local communities sought out architects (sometimes even via organized competitions), acquired building materials and machinery, and managed the construction work, separately and in parallel to existing state structures. The most important postulate of the Second Vatican Council – community building – took root not only in the religious buildings and their designs, but in the very social, grassroots and DIY mode of their creation.

Thus, in the 1980s two disparate modes of architecture developed in Poland in parallel to one another: state architecture and religious architecture. The socialist state produced rational, modernist architecture over the six-day working week (until Solidarity had it reduced to five), while modern industry and infrastructure produced prefabricated housing estates and their accompanying schools, kindergartens and hospitals. This was complemented by Day-VII Architecture, that is the thousands of churches erected among the vast network of housing estates to provide them with a spiritual element, as well as tradition and local identity. Sacred architecture was also a way of articulating protest against the reality of the declining socialist system, a contestation of the political status quo. Last but not least, for the most part it was created by a young generation of architects who were just entering the labour market and who saw designing churches as a way to realize their creative ambitions. This kind of architecture thus needed an entirely new language of expression and postmodernism, which was infiltrating from the West, met this need perfectly.

While the modernist architecture of the first half of the twentieth century was co-shaped by designers from both socialist and capitalist countries, the Iron Curtain disturbed this order. For several decades after WWII, architecture developed separately in the East and in the West, intersecting only occasionally. This is the period during which a new trend that polemicized with modernism – the theory and formal language of postmodernism – emerged in the West. Architects from socialist countries were fully aware of the existence of this new, dynamic and multi-layered architecture: among them book-length manifestos, photographs and postcards circulated. The church construction boom the perfect pretext on which to import postmodern ideas into Poland and thus to bring Polish architecture closer to its western counterpart.

Postmodern forms were perfectly suited to the struggle against the unified socialist landscape. Found in books brought from the West, the elements of this new formal language were adapted to fit the local reality. In the process, however, they took on completely new meanings. Interestingly, the ideas of postmodernists were a perfect match for the challenges faced by designers of Polish churches. Here, for example, the postmodern call to return to tradition fell on fertile ground: the Church wanted to be seen as the guardian of national heritage and as a link with Polish history. After decades of concrete, prefabricated modernism, there was a return to brick, stone and traditional building methods with the construction of churches. Given the lack of access to machinery, industry or modern-day materials, this move was both ideological and pragmatic.

The same can be said about another postmodern architectural notion: the building-symbol. For church architecture, this symbol is the cross, an inseparable element of every church, whose significance in the PRL was strengthened by the church-state competition for the government of souls. Architects did everything they could to creatively address the question of the visibility and form of the cross. In contrast to the cross, which stands as an integral part of every church, the TV antenna towering over Robert Venturi's Guild House, one of postmodernism’s most important icons, appears an exterior element added by force. Even elements of postmodern irony and polemical play with traditional forms came to be implemented in the churches. Slanted, or even levitating, columns turned out to be a perfect solution to the post-conciliar call to create a single space interior with excellent visibility.

The 1980s was the highpoint of this Polish religious architecture. It was Solidarity that made it possible to build churches again, and this longstanding hope met with the creative ambitions of the new generation of architects. Permitted to operate outside of the usual industrial restrictions, these architects welcomed the influx of fresh formal ideas from the West. Moreover, the upsurge in social energies willing to contribute to the construction work was greeted with support from the upper echelons of the church dealing with modern architecture. Paradoxically, however, all these dimensions would be weakened by the collapse of socialism at the turn of the decade. After the fall of the common unifying enemy – that ‘godless’ political system, communism – the fuel required for collaborative action motivated by protest came to an end. The fact of replacing socialism with a market economy was equally important. The state construction industry either went bankrupt or was privatized; church construction was quickly professionalized, and the grassroots, DIY method was replaced by one around monetary transactions. Hitherto disparate architectures merged into one. [...]