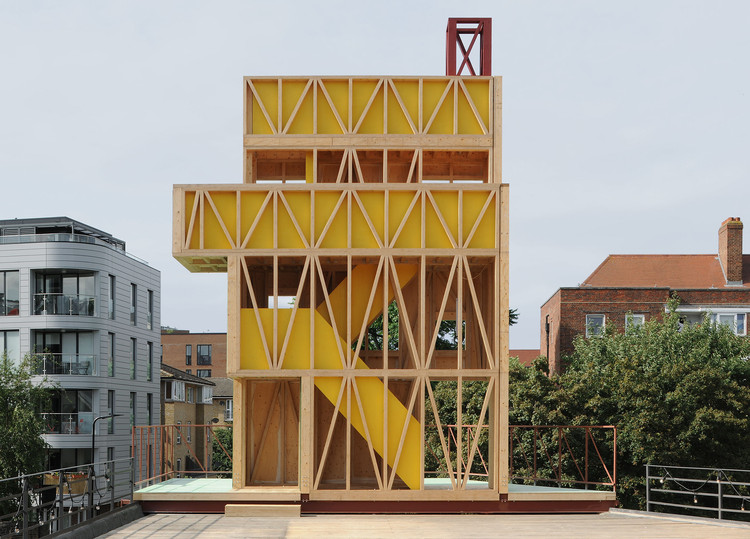 The third Antepavilion is set to open this week in east London — designed by young architecture firm Maich Swift Architects, the canalside wooden rooftop theater built in Haggerston, London, is inspired by Monsieur Hulot in Jacques Tati’s 1958 film "Mon Oncle". "Potemkin theatre" was chosen from almost 200 entries in an open competition launched by the Architecture Foundation and Shiva Ltd.

The colorful structure was built in less than a month by a team of volunteers. The painted laminated veneer lumber structural frame and façade reference theater flats commonly used in set design.

“The architectural concept has an emphasis on flexibility in use, and will provide a variety of space with the potential for a wide range of public events. The two-sided aspect lends itself to engagement from both the canal side and the rooftop. Theatrical productions, opera, small music concerts and film screenings will all form part of a cultural programme,” — Ted Swift and Paul Maich of Maich Swift.

The Antepavilion will host a wide range of event over August and September altogether named Beacon Festival. Supported by a grant from Arts Council England, the occasion includes work by Americ author Roland Smith, Shadwell Opera, Canadian playwriter Oren Safdie and a symposium exploring the relationship between architecture and immersive performance.