The Architecture Foundation has announced the winning design for Antepavilion, the annual installation program in London. Chosen from more than 200 entries and six finalists, Maich Swift Architects ‘Potemkin Theatre’ features “colorful panels of painted canvas, which will act as both a canalside theatre and a rooftop cinema.” The design perches on the rooftop of a warehouse along east London’s Regents Canal, creating a visible landmark in the low-scale neighbourhood. 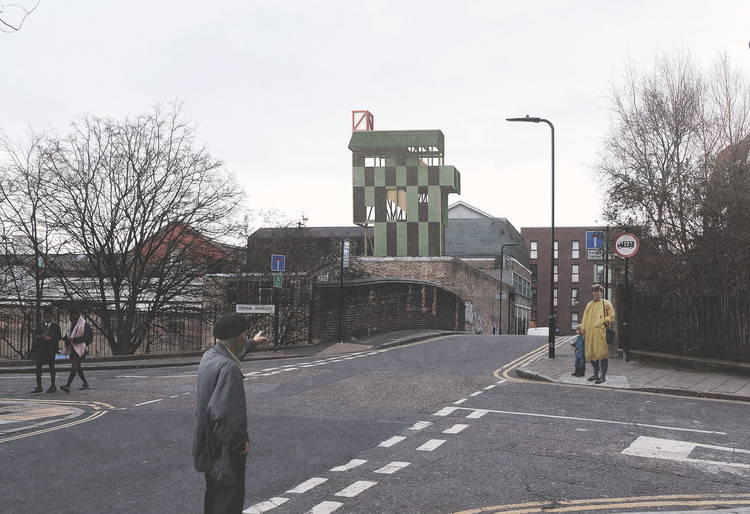 A tall, narrow tower, Potemkin Theatre will also play host to a number of events that will activate the surrounding roofscape, spilling out onto the adjacent canal and roadsides. “The jury were very impressed by the quality of work produced by the finalists in this year’s competition,” said jury chair Chloe Spiby Loh. “Maich Swift’s Potemkin Theatre excited us with its bold celebration of informal structures and its playful programme. We also felt it would be a very publically engaging project, that many would find enjoyment in.” The 2019 Antepavilion will activate the roofscape of the Columbia and Brunswick Wharf site, its adjacent canal and roadsides with public performances.

Potential programming includes site-specific productions with touring theatre productions, small music concerts, film screenings, soapbox speeches, comedy shows or even Architecture Foundation events. The £25,000 project will transform a corner of the roof into a signpost for the wharf’s ‘alternative educational and experimental ethos’. Maich Swift’s Antepavilion is the third to be produced in the annual series, a series quickly becoming a staple amongst architectural events in London. The Antepavilion jury also announced the four other finalists for the 2019 installation: Fettle Studio, Iandelli Irving, MISC, Matthijs La Roi and Simone Tchonova.