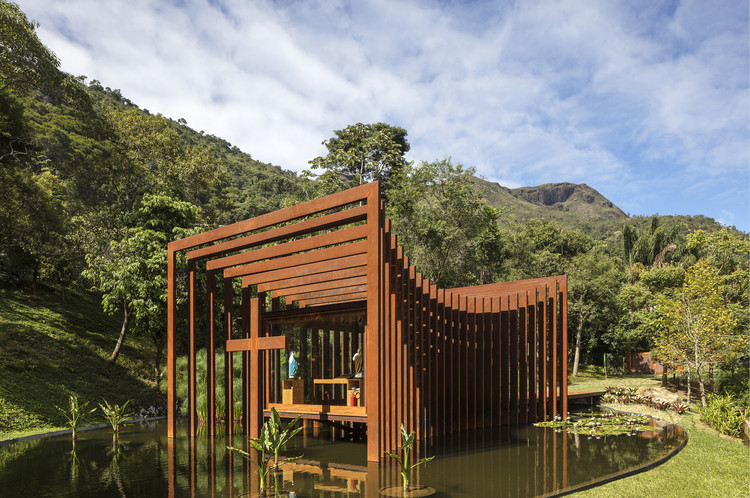 Text description provided by the architects. GN Chapel follows an important tradition on Brazilian architecture that is the construction of religious buildings on private residences. During the colonial period (especially sec XVIII and XIX), over the influence of Portuguese architecture, most of the farms had its own private chapel. The farms and surrounding cities were part of an important economic system based on the culture of coffee, one of the pillars of the Brazilian economy by that period. The existence of such peculiar architectural buildings was such a landmark that they boosted an artistic style that was once very remarkable and important for Brazil. To this artistic style was given the name of Barroque its most well known being the one developed in Minas Gerais.

However, in the present days, the commission of that kind of building in Brazilian contemporary architecture is not common anymore, even though all over the world many of the most important international architects have a religious building on their portfolios, those include Tadao Ando, Shigeru Ban, Renzo Piano, Alvaro Siza, and others. GN Chapel is located in the mountains near Rio de Janeiro, for coincidence the same region as the historical colonial farms, where this type of project was so common. The client and his wife, married for a few years and with grown kids, envisioned a space dedicated to their saint of devotion, where they would be able to, in the future, renew their vows and see their children getting married, as well as baptizing their grandchildren and on it goes.

We took advantage of the area’s topography to create a lake, so the building could float over it and so it could mirror the façade of the chapel that laid on top of it. When it happens, the mirrored image replicates the same form as its blueprint. This project is defined by three main elements: A bridge 4 meters large balances itself on central pillars which disappear giving the impression of a floating chapel sitting on top of the lake. On the edge of this bridge, a glass box defines the enclosed space. Twenty-five steel rectangular portals with different sizes emerge from the water surface working as the exoskeleton designing a gentle curve on the air, defining a building that expands and retracts.

Those expanding and retracting sensations provided by the architecture reinforce the spiritual effects expected from the prayers. Those portals also work as brises-soleil providing shade and privacy to the prayer room. This building dialogues with important Brazilian architectural and artistic movements. Initially, as explained before, with the colonial architecture. Following the Barroque movement, so present on the country religious buildings. Its steel frames exceed the boundaries of the building working as space sculptures.

Exactly as the Barroque altars and sculptures from the past that were used to breach the physical limits of their supports. Finally, it uses some essential elements from the modernism as the brise-soleils and its curved form, on its blueprint and facade. Those elements were very present on the Brazilian modernist buildings, especially those designed by Oscar Niemeyer and Sergio Bernardes. All the furniture inside the chapel was designed by our architecture studio using two different kinds of wood from the Brazilian flora: Peroba and Cumaru. 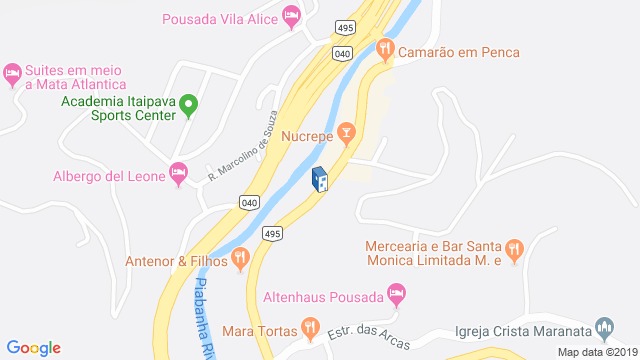 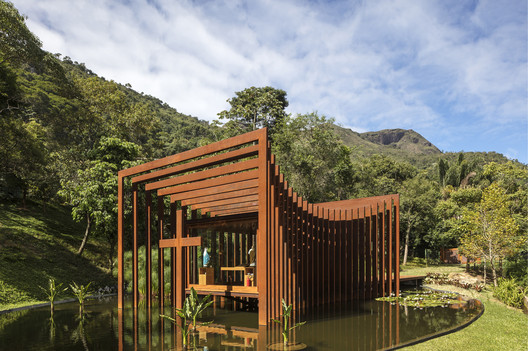