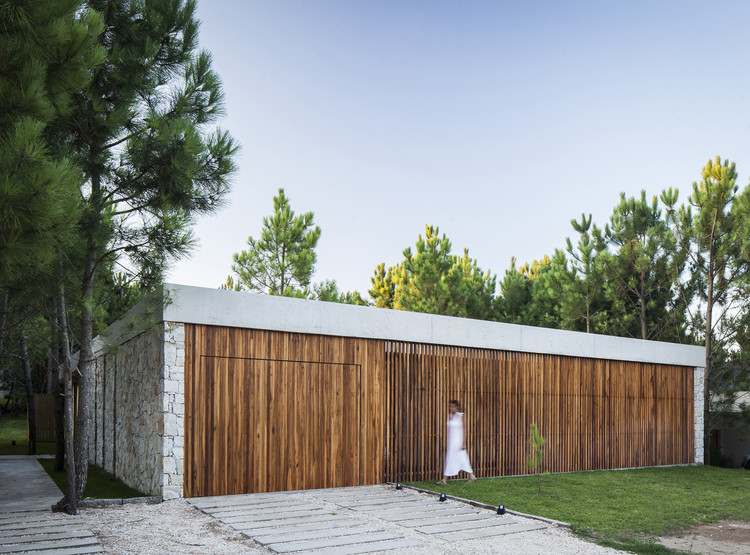 Text description provided by the architects. This weekend home is located on the Atlantic coast, in the Costa Esmeralda neighbourhood, 10 km from Pinamar and 500 m from the sea. We sought to animate the house using a path passing through a conifer forest and with different light-collecting courtyards that articulate the spaces. The project is developed on one floor where the central courtyard divides the house into two volumes, one for public use and one for private use. A second courtyard allows connecting with the green from the bedrooms as well, without losing privacy, with a wooden enclosure that generates a rhythm of light and shadow forming the main facade.

Implanted in a conifer forest, the house is to be experienced already when walking the path in the forest, perceiving it from green bellows that connect the different spaces. The main access is generated from a central courtyard, with original pine trees rescued from the area. The central courtyard distributes to all the environments, dividing the public area from the private one and allowing contact with nature.

The house is developed on the ground floor, having a perimeter wall of stone, where the bearing walls support a large roof that acts as a perforated mantle, consisting of a thick concrete slab. These perforations, or courtyards, allow the passage of light into the house, generating a play of light and shadows throughout the day.

The private area has visuals towards the central courtyard and to the most intimate courtyard, in the front of the house, which has a wooden enclosure that generates a rhythm of lights. The public area resides in the entire context of the forest.

Being in contact with a hostile climate due to the proximity to the sea,  A30 DVH aluminium windows were used to protect the interior from the environment.

We worked with a system of routes and transitions, always being in contact with the vegetation through the different courtyards that make up this weekend home.  The forest is aimed to be experienced in different ways generating various situations between the public and the private spaces.

The biggest challenge we faced was to think of a different way of seeing the house from the forest path; starting with the side access that invites us to dive into the forest and then enter through the centre via an internal courtyard. Including the vegetation and nature inside the house was prioritized at all times, generating courtyards of different scales, obtaining a fluid interior-exterior relationship. Another challenge was to solve a simple yet special program since one of the client's exclusive requests was that the floor plan would be executed entirely on the ground floor, without losing sight of the forest.

The correct orientation was prioritized to reduce the energy cost of air conditioning and heating. The central courtyard of the house is oriented towards the north in order to ensure good lighting during the sun's path throughout the day. The bedrooms are oriented towards the east as we consider it the best orientation as the morning light is the activator of these spaces.