Save
Three Rooms in a Roof Garden / Atelier Z+ 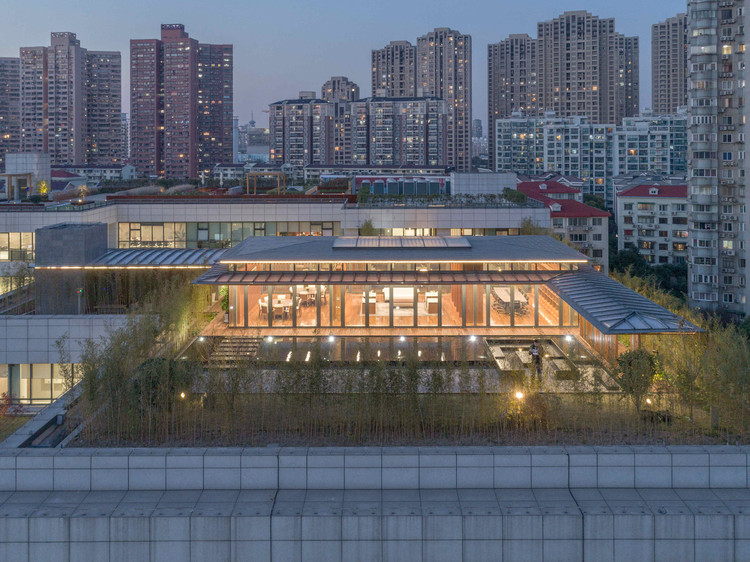 Text description provided by the architects. As a small conference and reception facility, “Three Rooms in a Roof Garden” is a part of the roof landscape that was designed for a financial technology enterprise located in its headquarters office building in a technology park. The whole garden is distributed on the roofs of three floors with different heights, and the roof of this “Three Rooms” is connected to the executive office area on the north side. In this project, we had the opportunity to create a new landscape architecture integrating with the garden.

We took our ideas from the prototype of the thatched cottage, described by the poet Bai Juyi in his Notes on Lushan Cottage in the Tang Dynasty. It was a three-room cattage defined by two rows of columns. Such a prototype of the cottage plays an important role in the tradition of Chinese scholarly landscape painting. Its character and temperament, simple and integrated into the landscape, are in line with the internal requirements of this project. We hope to build a “secret garden” hidden high in the downtown area.

We arranged the main volume of the three-room building in the center of this roof and elevates it slightly. The larger room in the centre is the reception space while the smaller rooms on the east and west sides are the meeting room and the dining room respectively. The conference room and reception room are separated by a row of central axis swing doors. The two rooms can be used as one when needed.

Due to the irregular L-shaped roof of this floor, the three-room building in the centre naturally divides the roof into two courtyards with different width and depth in the south and the north. The north courtyard is relatively long in the longitudinal direction, facing two rooms on the east side. This courtyard is the entrance space from the executive office area and leads to the reception room by an aisle. The east side of the courtyard is a gently undulating lawn scattered with trees and stones, while the west side of it is a series of cascades.

The south courtyard is relatively wide, including a horizontal square water pool as wide as the three-room building. The pool is flush with the platform under the eaves on the south side, with no visible edge. There is a sunken activity space that can be reached by the stepping stones from the west end of the pool. An outdoor seat is embedded in the pool. The south side of the courtyard is surrounded by bamboo to create a separate but transparent view of the water and the sky.

The double eaves of the building controls the sense of scale well. The lower eaves form a semi-outdoor corridor around the building and they extend westward to the original elevator, becoming a wide open side hall and covering service spaces such as the toilet and kitchenette in the northwest corner. The east side corridor extends southward, forming a section of double corridor separated by wooden grilles. It serves as a scenic spot on the east end of the south courtyard pool.

Continuous floor-to-ceiling glass doors, which rotates on its axis, on the north and south sides of the building can be fully opened in the right weather. At this moment, the "three rooms" get good ventilation and lighting, and really integrate with the garden.

The elevated platform of the building accommodates the ground air supply system of the air conditioning, while the main part of the building is made of a slim light steel structure, and complemented by a warm wooden interior and exterior finish.

The extreme treatment of the lightweight double eaves roof brings people a sense of freedom with its pleasant scale. The roof of the upper eave, which is covered by zinc sheet, is equipped with large skylight, while the roof of the lower eave is covered with polycarbonate panel. The roof with double eaves weakens the volume of the building. The unified flat ceiling of solid timber grille under the eaves makes the light inside and outside the building more natural and soft. 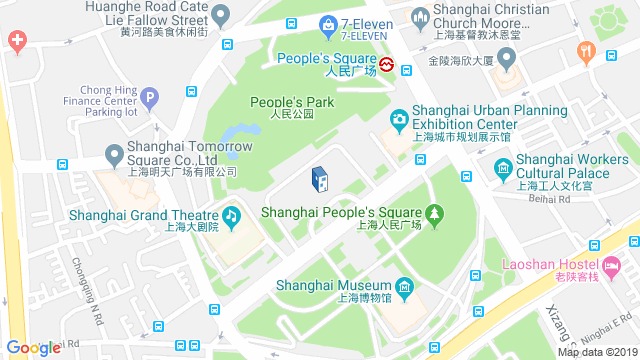 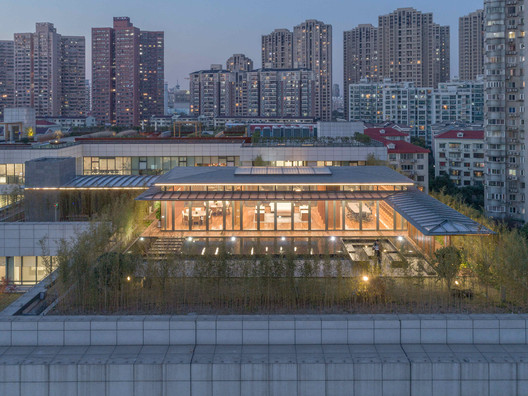