OMA has won the competition to design a new international financial center in Shenzhen, China. Called the IFEC, the project combines large scale conference facilities with a 400-room hotel and public programs. Located at the waterfront of Qianhai, the New District in the Pearl River Delta, the IFEC was designed to be a beacon for ships sailing along the 21st-century maritime silk road.

OMA's design for the International Conference and Exchange Center (IFEC) was chosen from seven international architecture firms. OMA’s design team is led by Chris van Duijn together with project architect Kellen Huang. As the team states, the complex will function as a connector between Qianhai’s future main public transport hub and a waterfront park, which links the various Qianhai districts through a shared public and cultural program. The design for IFEC comprises of three distinct volumes: the conference center is shaped into stepped volumes with terraces facing the park. The hotel, towering over the conference center, is a three-dimensional polyhedron and the third volume contains hotel amenities and public programs and is oriented to the center of the business district.

A large urban atrium brings the public domain to the heart of the complex, with a foyer for both the conference center and the hotel. The urban atrium can be separately programmed for cultural events, strengthening the relationship between the professional domain and public life in Qianhai. IFEC will be the fourth OMA building currently developed in Shenzhen. The competition entry was a collaboration between OMA and CCDI. 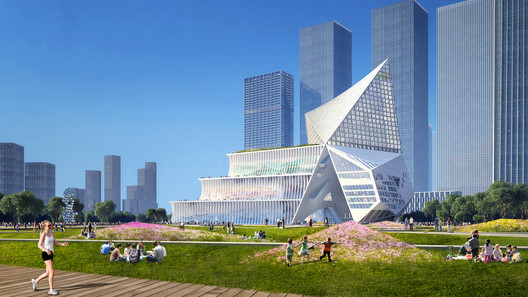