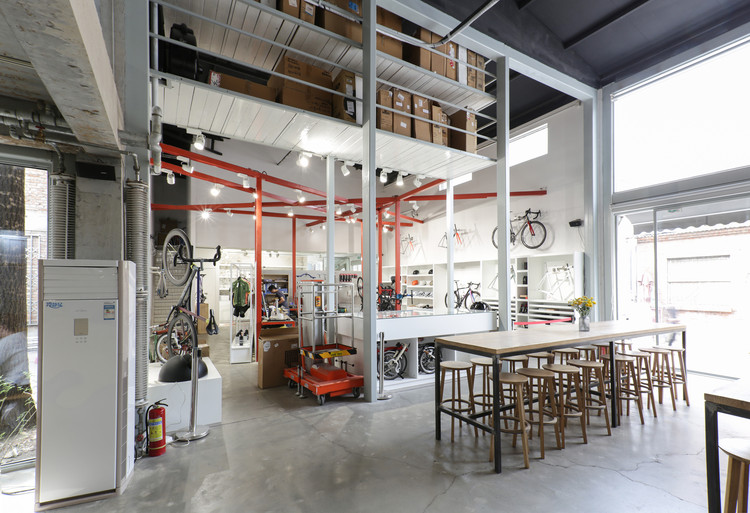 The factory
Comparing to those iconic big factory buildings with Bauhaus style in 798 zone, this factory is not so special and obvious. Its history is impossible to trace back, and tenants afterwards also made a lot of add-on in both interior and exterior space. It also reduced the original form of massing which is more and more ambiguous. The plan is almost a C shape, with an enclosed courtyard. The interior space is naturally split to 3 independent rectangular rooms for different tenants.

The room rent by coffee shop had been cut each floor into small office rooms previously. Due to the large depth and limited window opening size, the whole interior space looks very dim. In the same time another small box adding onto the street elevation makes the outline very obscure.

Back to the origin
The concept of VOYAGE COFFEE brand is very simple and strong, “make good coffee”.  So this concept also became the start point of architectural design. We reckon turning the space back to the origin is maybe the biggest respect to both the brand and the space.

Café space requires bright and refreshing atmosphere,  but masonry-concrete structure doesn’t allow big window. So we followed the existing structural column and strengthen the structure. The façade along the street is also separated vertically to two parts. The square steel in between is wider than other. It is to avoid the view of big thermal pipelines of 798 overhead on that height level along the street.

The coffee counter area requires lower ceiling height, so a new reinforced concrete frame system is inserted into the space, a second floor is added near the courtyard side. We try to minimize the effect of new structure on the original interior space form. And the new structure gives the building a space contrast between lower and higher.

In the same building, there is a customized bicycle shop on the other side of the wall. We demolished this load-bearing wall and replaced with steel structure which make the space more fluid. Customers can enter from entry either café’s or bicycle shop’s, also can have enjoy interesting experience of drinking coffee while watching engineer fixing bicycle. In the same time the new second floor space play the role of their open office. The outside ground of courtyard is newly poured with concrete entirely, to make sure no step in between in and out. In the season of spring and summer, shadow of tree can cover the whole courtyard, naturally become an ideal outdoor coffee place. The full height glazing on the façade also enhance the space continuity.

After the renovation, the general massing is more clear, space also finally get the chance to talk to sunlight. There is no eye catching or very exciting design element in it. However it is like a big vessel, people stay, walk, interact, feel calm and delighted. 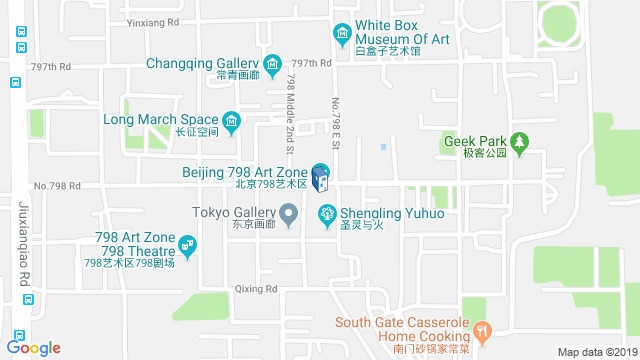 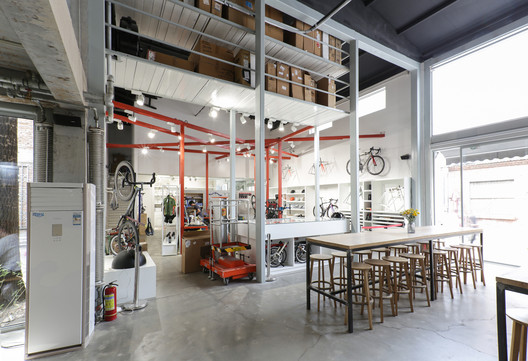