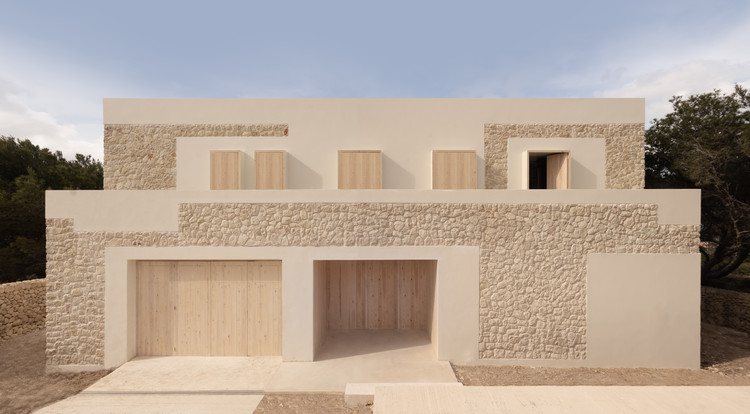 Text description provided by the architects. Stone House is located on a hillside facing the north coast of Minorca, Spain. This new dwelling is built with the same technique and material as the ancient limestone walls enclosing most of the farmlands on the island. Its sequence of superimposed stone layers (facade and fences) blend architecture and landscape into each other. This symbiosis is further strengthened by the fact that the facade’s stone was fully collected from the onsite excavation for the villa’s foundation.

The client’s program consisted of six bedrooms, living room, dining room, kitchen, garage and auxiliar rooms. All of them were organized around a magnificent double height space that connects both physically and visually the two floors. Thanks to its large upper floor glazing, this space becomes a very bright light-shaft for the whole house which otherwise could have lacked light in its core due to its depth. Thus all the villa’s circulation spirals around this void liberating it from narrow dark corridors and activating its heart.

From its generous 100 sqm covered porch, one can contemplate the most imposing cliffs of Minorca or enjoy its sunsets. This indoor/outdoor space functions as an extension of kitchen, dining and living room, and is therefore, where most social gatherings take place. It may be also understood as a grand generic space which allows for flexible settings, binds and interconnects the different day areas and acts as a threshold between house and nature. Thanks to this room’s openable double glazed facade it acts as a true thermal buffer becoming a cosy wintergarden in the mild season, a fresh shaded porch in the hot summers and the perfect hot-air insulating system in the winter. In the garden, wild olive trees and local vegetation surround a large limestone platform with a grey stone-coated swimming pool.

The client’s explicit wish to take strong references from the local traditional architecture faced the challenge of not falling into pure replica. The facade’s composition responds to a reinterpretation of the Minorcan custom of framing windows and edges with white plaster, thus creating a geometric patchwork of off-white plaster and light-tone stone. Thin steel frames project beyond the solid facade to protect the windows from direct sun and support the foldable wooden shutters. In order to enhance this thick/thin contrast, all windows were aligned to the interior and its frames were embedded from the outside creating the illusion of open holes on a stone wall.

Similarly to the facade’s earthy palette, the interior is a combination of continuous sand-coloured concrete pavement, whitewashed walls, pine wood carpentry and white-veiled wooden beams. These natural materials create a both warm but also airy atmosphere within the pastel range. All built-in kitchen furniture and wardrobes are custom made by a local carpenter. Details such as a solid hovering stair with integrated handrail-lighting create an interesting dialogue between traditional and contemporary architecture. Kitchen, wardrobes, libraries and niches were built in masonry keeping simplicity as a common thread. Furthermore, the use of soft indirect illumination was also designed throughout the house, avoiding placing exposed lighting fixtures on walls or beam-ceilings.

Inspired on the robustness and compactness of ancestral architecture, however using modern construction systems, this house reaches the highest ranking in sustainable performance. Its highly insulated skin, its facade’s solid-glass proportion and its flexible shading techniques guarantee a pleasant temperature all year around. 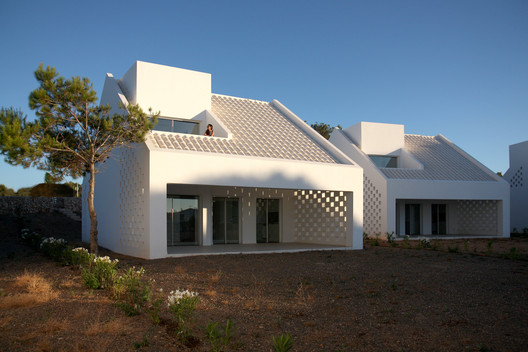