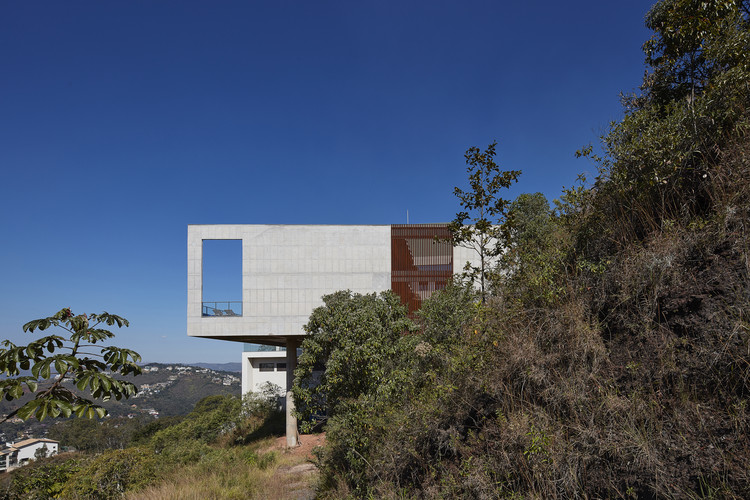 Text description provided by the architects. The ML residence is located in the city of Nova lima , state of Minas Gerais. The plot is in a mountainous site with an average slope of 53 per cent. In order to avoid permanent retaining walls (structures) it was decided that the interference in the topography and earthwork would be minimum as well as the number of building pillars, the result being a ‘volume’ which would appear lighter and detached from the ground.

We have also created two concrete walls on the north and South elevations, which not only define the volume of the house, but also prevent the waste of material, as we used metalical formworks. It also prevents further finishing since it is difficult to use scaffolding in this height. The apparent concrete reduces the need for further maintenance of the facade.

The height of the building was defined according to the street greid to give direct access from the front of the house to the garage, and, at the back , good natural lighting on the ground under the construction , which facilitates the execution of the landscaping, which even though is in a covered area, allows a larger diversity of species.

The house has two floors, being the first on the street level and the second below it. The garage and the living area are on the ground floor whereas the social areas are on the second floor The social access is made by a staircase which leads to an open square which makes the transition between the living area and the street. All the social area opens to this square (in the West) through wooden doors which function as mobile brises and to the mountains view (in the east) through glass walls, thus creating a situation of cross ventilation and abundant natural lighting. All bedrooms do also face Sunrise and the mountain view.

Through the right position of the house in relation to the sun, (which dispenses the use o air-conditioning), efficient artificial lighting and photovoltaic and solar plaques, the house presents an efficient energetic performance.