Herzog & de Meuron have released images of their proposed mixed-use office scheme in Munich, Germany. Reusing an old building south of Munich rail station, the project features a large courtyard garden accessible to the neighborhood at the center of the site.

The project is located in an area south of Munich rail station, bustling during the day though void of activity during the evening and night. The subject site currently hosts the former administration building of the Postbank, an imposing six-story structure with very little light and air reaching the interior, and small stacked courtards in the central portion.

The Herzog & de Meuron scheme focuses on re-adapting the building to accommodate a mixture of downtown uses and meet the highest standards of quality and sustainability. While retaining almost two-thirds of the shell, the dense, poorly lit interior will be dismantled, gaps in the perimeter filled, and the block straightened, to create a continuous ring of buildings with flexible office space.

The ground floor contains retail and restaurants facing both the street and inner courtyard, with the basement floor below containing parking for 1000 bicycles, delivery entrance, and waste disposal. Above ground, two floors are set back from the street, along with an uninterrupted eaves all around the complex to create a calming, streamlining effect on the urban context.

The scheme’s central courtyard seeks to become a green magnet for the area; an oasis protected from the rush of traffic. Evaporative cooling and natural air purification through large leaves and photosynthesis process generate a microclimate. A broad oval of colored glass balustrades forms an encompassing circle around the entire rectangular courtyard, while curved inner corners make room for quiet spots or staircases.

By exposing the clearly organized, “naked” loadbearing structure and accentuating the ground-floor and the corners of the buildings, the scheme acquires an almost classicist appearance reminiscent of the grand and sumptuous urban palaces in downtown Munich, their facades embellished with spacious arcades. Although the new complex will be modern, contemporary, and extensively glazed, it will blend into the cityscape characteristic of Munich, while simultaneously retaining some of the earthy charm of the nearby “Orientalischer Viktualienmarkt.” 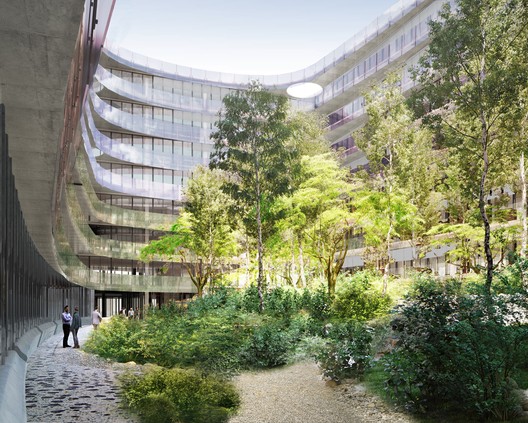