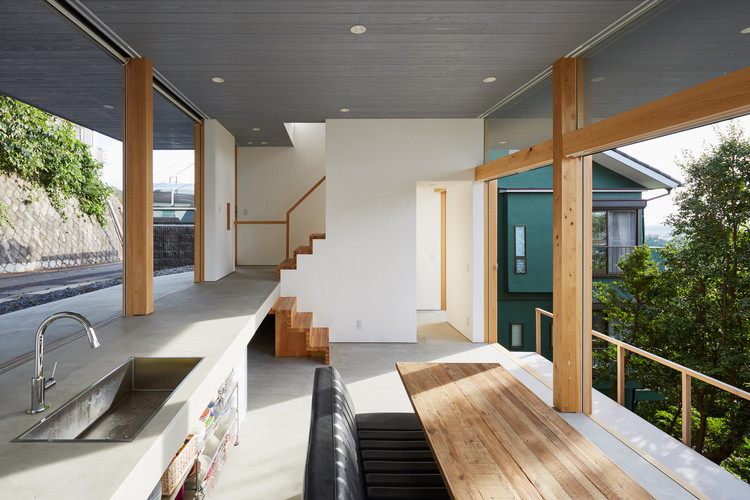 Text description provided by the architects. The site is located on the hillside of a small mountain overlooking the city. It is bound by two roads on the east and west side with a level difference of 16m between the two sides. In this area, from the east which is the higher part of the mountain to the west, are a retaining wall and a front road, followed by a slope covered with trees, another retaining wall and a road at the foot of it.

When observing the houses built on this mountain, I noticed that there were generally two types of building methods. One was to provide artificial soil and build a typical house on top of it, and the other was to build a basement level by digging the slope. Both are convincing methods to deal with the slope, but I wanted to propose a way of living where one can feel closer to the slope and the trees that grow in the area.

For this reason, I decided to design the “House on a Tiered Foundation” which has a sectional form of a tiered doll stand for Hina dolls that follows the sloped surface and a foundation shallow enough so as not to disturb the flow of the subsoil water. This tiered foundation is composed of three steps that step down 80cm each following the surface of the slope from east to west. The second floor which has much of its functions including bathrooms projects out 1.8m each on both the east and west side and functions as an intermediate space that ties the indoor and outdoor together.

The highest step on the east side acts as a buffer space between the house and the road, and also becomes an entrance porch and a porte cochere. In addition, this step is extended 90cm inward towards the house to provide a kitchen counter at the same level as the road, study desk for children and a landing for the stairs leading up to the second floor.

By offering this step and direction for living, I wanted to create an apt relationship where glances from neighbors walking on the front road will not be confronted nor shut out. The step on the west side acts as a terrace that cantilevers out as if to dive into the trees, creating a place where one can feel pleasant sunlight and breeze coming through the trees.

Facing the intermediate space, wooden fittings that can be drawn into the walls were installed. On the east side is a 3.6m by 2.2m opening and on the west side is a 5.4m by 3.0m opening. The “House on a Tiered Foundation” where the interior, intermediate space, tiered steps, slope and trees are combined as a whole by steps, pilotis and wooden fittings, becomes a topography rather than a residence, and the residents will live in this terrain. 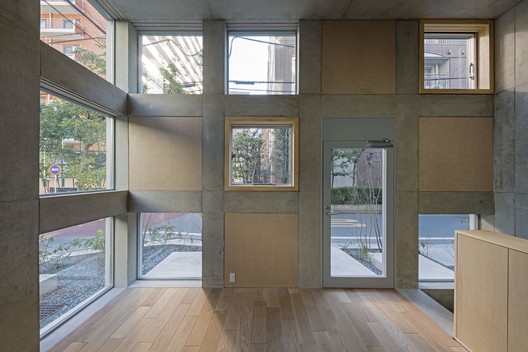 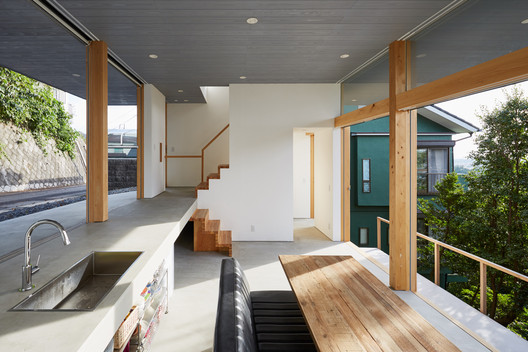