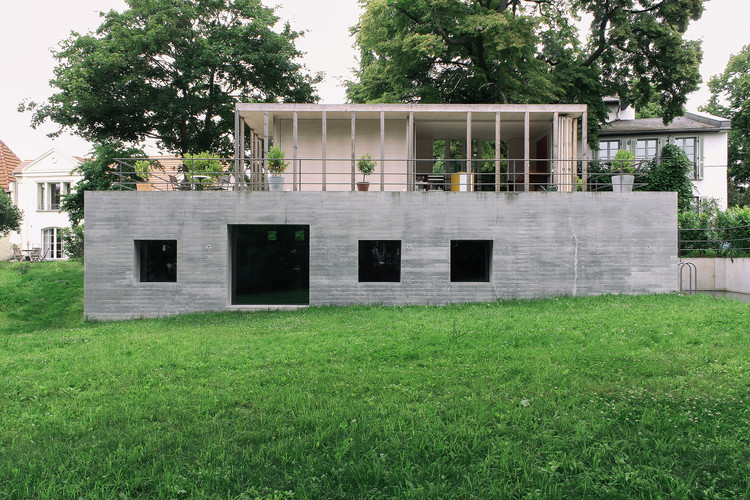 Surroundings. On the highest point of Werder Island, near Berlin, are four buildings of very different styles: a Neo-Gothic Belvedere, an Art-Deco villa, a stable building with an attached Neo-Classical facade, as well as a bungalow from the German Democratic Republic (East Germany) era on the neighboring property. The Haus am See is situated on a slope facing the river Havel. Nestled in between the four other houses, it tells the story of a stone found, as it has always been, without style or form, which has been converted into a house. The stone is a hollowed-out concrete body into which openings have been cut.

Expansion concept. In contrast to the solid concrete block, the rest of the structures are made of wood. All the construction materials remain visible. Free-standing partition walls made of wood subdivide the interior and wooden window frames protect against the weather. A wooden pavilion has been placed on the roof. The surrounding terrace offers a view of the passing Havel river. A wooden staircase, which also serves as a bookshelf, connects both floors. The large sliding doors provide access to the stone outdoor pool and the garden which slopes down to the river.

Seasonal concept. The Haus am See is used differently depending on the season. In winter, the residents retire to the garden floor. In summer, the pavilion and terrace are added, doubling the living space. The mobile kitchen moves with the residents. Folding doors open the pavilion in the warmer months and close it during the colder seasons. A horizontal sliding window separates the pavilion from the garden level in winter. Condensing the living space in winter saves resources, construction and heating costs. The insulation is reduced to the garden level. The northern, eastern and western sides are buried in the slope. The earth layer provides the house with additional insulation.

The waste heat from below makes it possible to use the pavilion as a conservatory for plants in the colder seasons. The closed, unheated room then serves as an extra layer of insulation for the garden floor. The seasonal living concept brings a millennia-old cultural technique into the present day. In contrast to conventional energy-saving houses, which isolate themselves from their surroundings, it shows how we can effectively conserve resources while living sustainably in connection with the environment. The seasonal concept is a strategy for sustainable living in a time of excessive insulation regulations.