Save
IIjeong House / On Architects Inc. 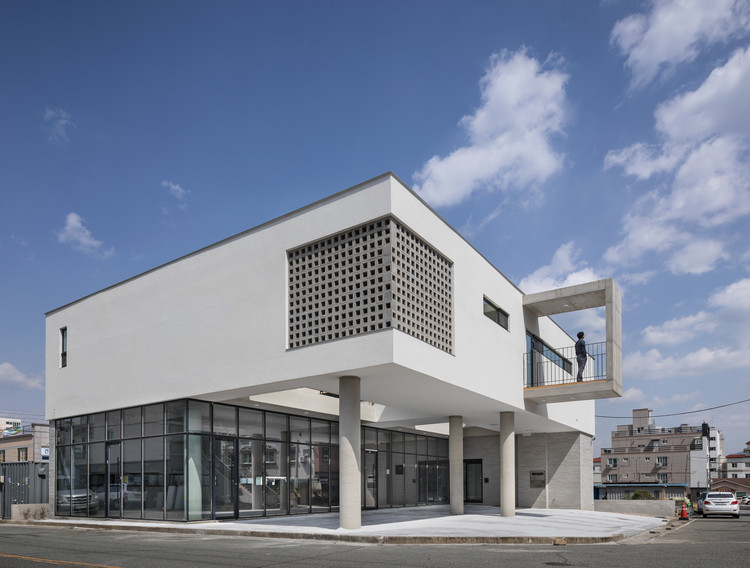 Text description provided by the architects. We proposed a new interpretation for the construction of a leased housing for the client’s parents in a city neighboring Ulsan, where there are rows of multi-family houses.

The site is located near the KTX train station in Eonyang area. It is in the outskirts of Ulsan, where there are still a lot of empty lots due to low popularity even though development started a long time ago. Recently, many new multi-family houses have been constructed around the site.

The surrounding multi-family houses and commercial facilities, like most of our suburban architecture, are built to have a suffocating structure. Because of how our lives have been, the buildings are not much different from those in the city center and do not reflect the suburban nature or have the characteristics of the place. We tried to suggest a new alternative by creating a courtyard with a medial space in the leased housing area of the suburban city.

For the client's parents who have spent their entire lives farming and cultivating crops, we thought that the leased housing should have elements of a single-family house, even though it is a commercial residential building. We wanted the parents, who live on the second-floor, to have the illusion of living in a ground floor house with a yard.

The public utilities and guest room for their adult children were placed into a mass by the road, while the parents’ living space was placed on the other side of the road. The external courtyard area was again separated by the corridor that connects the two masses. The courtyards have different characters and act as a device to protect the privacy of the users of the first floor and the surrounding housing tenants. The parents who cultivate crops and make different fermented pastes (soybean paste, fast fermented bean paste, red pepper paste, etc.) need a space that functions like our traditional yard. The connection through the corridor leads to a spatial expansion through the outer terrace protruding to the south road. This protruding terrace also establishes a communicative relationship with the surrounding city.

In front of the commercial area on the first floor, a large square with characteristics of an urban plaza was placed. This will be used as a multipurpose space of the commercial building, and will create a new communicative relationship with users who will afford the convenience of a nearby city. The first floor square and the two different courtyards on the second floor form an external connection.

I hope that this building will inspire changes in the surrounding area by suggesting the new possibility of buildings in the suburbs.