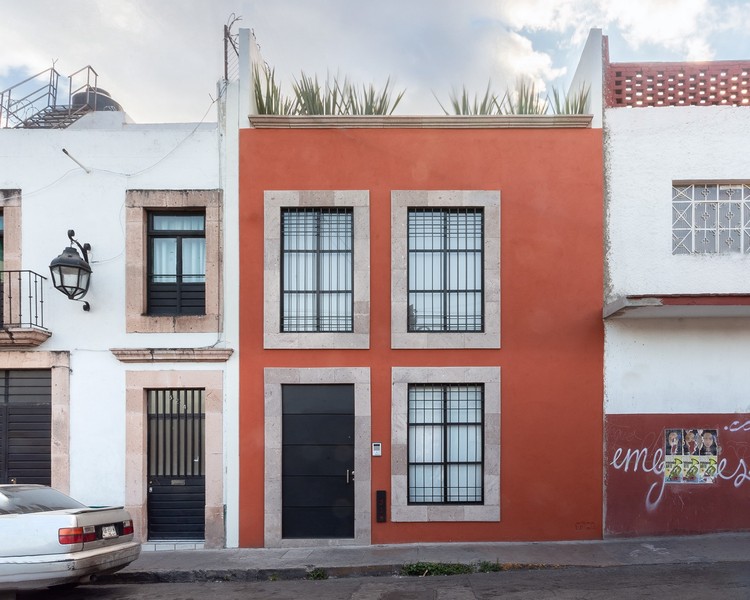 Text description provided by the architects. The Cervantes home is located in Centro Histórico in the city of Morelia, Michoacán. The house was practically in ruins, which in turn, did not meet the optimal characteristics for a restoration. Because of this, the client opted for a demolition of the home, which projected over a lot of 97 m2 and an architectural program large enough for the lots surface. Some of the primary requests that the client had where: to have a large public space with thermal comfort for its atmosphere, and plenty of lighting.

Client also requested for a front of 5.50 m, to which this request was resolved by adding double the height of the public space, thus adding more space for ventilation and natural light for the living room, kitchen and dining area. As for the three bedrooms that were solicited, each one of them feature a closet and complete bathroom. Furthermore, the requisite of endowing ventilation, and lighting for the rooms, was dealt with by adding cubes of light with feathery bamboo gardens. This was decided due to the plants characteristics of accelerated vertical growth that it will have, ultimately giving the function of a garden on the very top story of the home.

Another essential part of this project is, keeping in mind the day to day of its users. An example of such, would be the coexistence in its interior, to which then lead for the rooftop to act as a terrace. Furthermore, such space will have an uncovered area, while also having another area roofed via pergola.

As for the facade of the project, the architectural language of its predecessor was respected by maintaining the integration of its environment. The Cervantes house is the perfect home for someone who has a liking for Centro Histórico de Morelia, to which one can count on its services and amenities, all in just a few steps away.