Save
The 20 Most Bike-Friendly Cities in the World, According to Copenhagenize 2019
Share
Or
Copy

It should come as no surprise that one of the most respected surveys about bicycle use comes from a Danish organization. This ranking by Copenhagenize Design Company uses a point system to compile a list of the cities looking to re-establish the bicycle as an accepted and practical mode of transportation.

This urban design consultant, with offices in Copenhagen, Brussels, and Montreal, assess and advise local governments on how to create a more cyclist-friendly urban landscape through planning, urban design, communication, and research, instead of focusing exclusively on the cities' engineering.

"While Copenhagen, Amsterdam, and Utrecht maintain their spots at the top of the list for urban cyclist paradises, this year 4 new additions from different continents show how cities the world over are taking steps forward in making the bicycle one of their principal modes of transportation." - Copenhagenize Design Company

"Copenhagen took the top spot in the list as the city best suited for cyclists in 2015. And even though the Danish capital is still in the lead in 2019, it's only by a small margin. The competition is fierce, with Amsterdam and Utrecht not far behind. But Copenhagen stayed ahead this year with sustained investment and statistics that put it ahead of its urban counterparts."

"It's 2019 and Amsterdam is back in the game. Coming up from the third place, the Dutch capital, world-famous for its bicycle use, shows us how a city can take back its top spot after addressing its weak points."

"It's hard to set yourself apart as a cyclist's city in the Netherlands. The competition is so fierce. Yet within this group, Utrecht shines as a city ready to embrace innovation and to push the limits."

"In the last two years, Antwerp has continued building its well-established reputation as a bike-friendly city. The trifecta of initiatives through a visionary base, professional experience, and municipal action has been the right combination to drive the city forward. The impulse seen years before has only continued to grow and, in many ways, as produced solid results."

"Strasbourg has been named as the top French city for cyclists. And even though other French cities have taken note and followed its example, it still maintains its top spot thanks to its centralized network of urban cycling."

"Bordeaux has maintained its grip on the number 6 spot on our list this year, thanks to its continued innovation and maintenance that prioritizes bicycles in its urban transportation scheme."

"Moving up the list as one of the up-and-coming cities for bicyclists, the Norwegian capital jumped into the Top 20 in 2017, landing the number 7 spot. Oslo is an example for every city that has been called "too mountainous and snowy" to seriously consider bikes as an optimal means of transportation."

"After years of trying to make bicycles and buses coexist in the same lane, Paris is finally making good on its promise to construct designated bike lanes, including on the Champs-Élysées. This new change has propelled the French capital 5 spots up the list since our 2017 ranking."

"Vienna finds itself in the Top 10 of our list thanks to its efforts to go above and beyond the norms of making itself bike-friendly. While the city continues investing modestly in its biking infrastructure, it sets itself apart thanks to its innovative and constructive communication policies and efforts."

"With the ambitious goal of being the world's top city for sustainable transportation, the Finnish capital, along with Paris, has set a quota to have 15% of inter-city transportation be bicycle-based by 2020. With the current percentage at 11%, Helsinki is set to become the leader of northern Europe in terms of bicycle culture."

"Bremen made its way to the 11th spot this year with the largest quota for bicycle transport in Germany (25%), including an expansion of its bicycle lanes and a bicycle district. And we aren't alone in recognizing Bremen. In a recent national survey, the German city was ranked among the best for cities of its size."

"This year there was a newcomer to the Top 20. The Colombian capital Bogota, despite being packed with automobiles, has definitely earned its place on this year's list."

"Despite slipping 2 spots this year, Barcelona continues serving as an example for innovation in urban mobility. With an ever-expanding transportation network and a plan to better incorporate bicycles through numerous pilot programs, Barcelona holds its spot in the Top 20 for the 8th consecutive year."

"Even though the Slovene capital got bumped down on the list this year, it still keeps its spot in the Top 20 this year for it ongoing innovation and bicycle-centered development."

"The 2015 Volksentscheid Fahrrad (the bicycle referendum) was a necessary step for urban mobility in the German capital. With more than 100,000 signatures, the 2015 referendum legally obligated the Senate to make the city more cyclist-friendly. Now, standing firm behind the referendum, Berlin has proposed to follow through with an ambitious and updated Bicycle Plan."

"Tokyo has been a cyclist's city for many years, not because of its infrastructure or official planning, but because of its residents. In the world's biggest metropolis, there are millions and millions of people who use their utilitarian Mamachari bicycles to transport everything from goods to children, to go anywhere be it the store, school, or the train station."

"Taiwan has been a powerhouse in bicycle production for many years, winning it the title of "The Bicycle Kingdom." However, despite this, it's only recently that the Taiwanese capital has started to integrate bicycles into its own urban transportation plan, making it a newcomer to the Top 20 list of this year."

"As the only North American city to make the list every year since 2011, this economic and cultural hub of Canada has teetered on the edge of the Top 20 spots for several years thanks to a lack of innovation. In 2017, Montreal was shaken up by the election of the Projet Montréal party of Valérie Plante, who won an overwhelming majority of votes with a platform that emphasized increased infrastructure for cyclists and renewed investment in public transportation."

"Vancouver is one of the few North American cities that has beaten the odds through constant innovation regarding bicycle-centered urban development. Bicycle culture in this laid-back Pacific metropolis has always been sport-centered, but now, thanks to administrative efforts, bicycling is making its way into the mainstream of transportation, with efforts to include all ages and all abilities."

"Hamburg slipped 3 spots this year, not necessarily for a lack of effort, but for being defeated by the competition. The north German metropolis is showing signs that it is fed up with the status quo and is ready to take daily cycling to the next level, looking to improve itself in every category. And if Hamburg puts its money where its mouth is, it will definitely be a city to watch in the next two years." 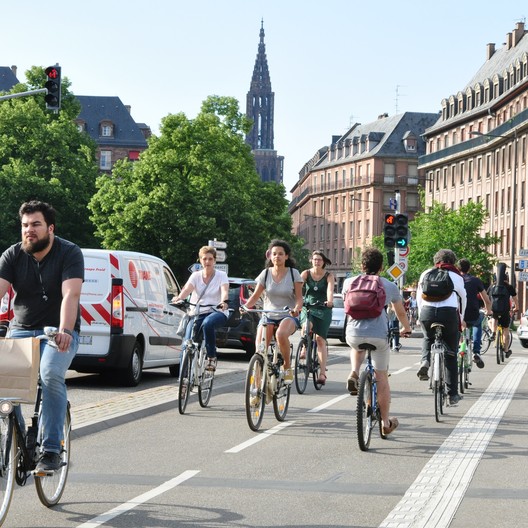