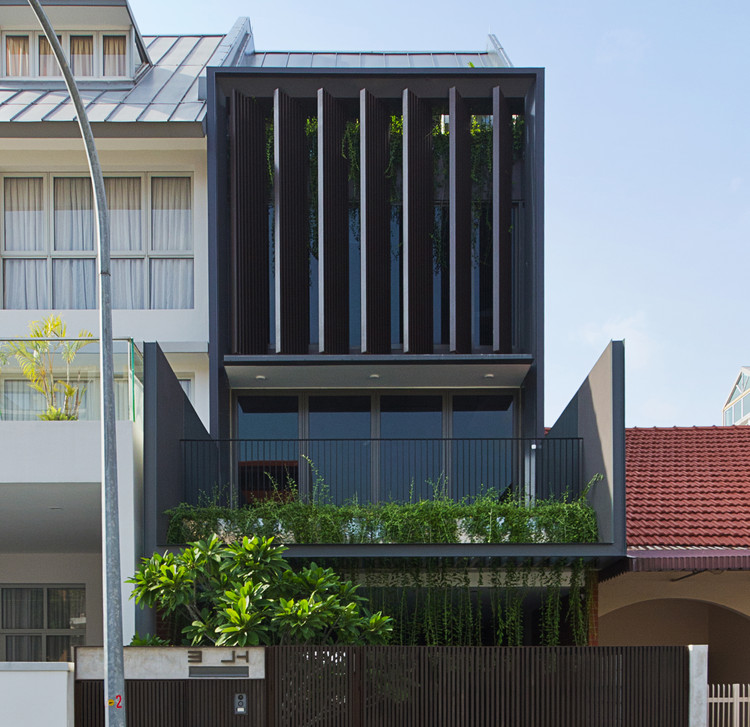 Text description provided by the architects. The project was fundamentally conceived by a husband and wife team, both architects, who set out to design a 3-generation dwelling for themselves, a modern tropical house which transcends beyond the confines of a tight intermediate terrace plot. One of the main challenges faced by the couple, who were avid swimmers, was how to accommodate a lap pool of decent size within the confines of an intermediate terrace house while not sacrificing the functional needs of the living spaces. The design solution that arises adopts the unconventional approach of lifting the living spaces of the house from the 2nd storey while freeing up the ground floor for a 21m lap pool and spa facilities.

The vast stretch of the pool and the linear composition of elements on the ground floor refutes the perception of the site as diminutive and narrow and greatly enhances the perception of the spaces which extends beyond its physical boundaries. The enduring concept of the courtyard house was also introduced where a 4-story air well rises above the lap pool at the heart of the house. All living spaces are planned around the central courtyard, with dual frontages – internal courtyard view and the exterior, maximizing both natural lighting and cross ventilation.

As such, the stacked effect created from the open courtyard and the provision of an extensive slide and fold window walls on all elevations allowing for maximum cross ventilation, give rise to living spaces which are constantly breezy. Functionally, the courtyard also serves as the volume which spatially connects the various familial spaces, allowing constant visual connectivity and communication between the occupants. The house and its occupants embrace a lifestyle that transits seamlessly between inside and outside, between intimate conditions and expansive prospects, all while in conversation with nature.

The main elevations of house are defined by a sleek rectilinear volume which extends the length of the plot while framing the various architectural elements – a series of vertical operable screens and a cantilevered volume which extends out as an open terrace. Use of full-height operable aluminum pivot screens along the front and back facade allows filtered natural light into the interiors while regulating the degree of privacy needed due to the close proximity to neighbors. Lush provision of vernonia elliptica along the perimeter of the courtyard on every floor gives the appearance of a verdant green curtain along common corridors leading to the bedrooms.

Bathrooms are designed as open-concept or open to the sky with flourishing shrubbery as a privacy veil, blurring the lines between the interior and exterior and the spaces appear to extend beyond the confines of the actual interior. The architects employed a controlled palette of materials for the house, with the conscious intention of revealing the true elements of construction as it is. Structural elements were explicitly left as bare screed finishes contrast against textured masonry walls throughout the house. In essence, the architects demonstrated deliberateness in the crafting of the house, creating a home which is optimized not augmented. What the house lacks in square footage it provides in volume and views - an inversion of expectation.