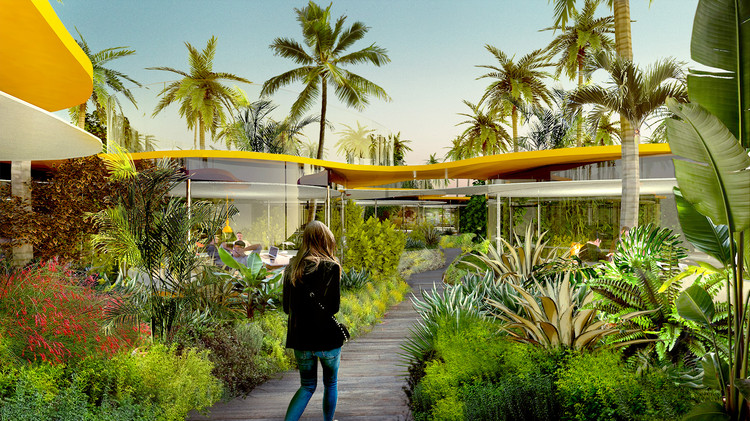 EB: Can you tell us a bit about your background, where you’re coming from, and how Second Home came about?

RS: I come from a public sector background. I spent many years as a Senior Policy Advisor to the British Prime Minister David Cameron. And before that I was economic advisor to the Shadow Chancellor, and I was at the British finance ministry. I was lucky to work on many areas of policy, from international development and public sector reform to health care and the environment. I was particularly passionate about entrepreneurship and innovation. The fun bits really.

I wanted to start a business for a long time, and when I left my job in the summer of 2013 I didn't have a specific idea in mind. One thing I had done previously in government was start an initiative called Tech City, which is about trying to build a digital cluster in East London. It worked really well. It got me thinking about space and place, and how the built environment can support job creation, entrepreneurship, and social impact. So I buddied up with my friend Sam Aldenton who is a serial entrepreneur, and we began Second Home in a derelict carpet factory in East London in 2014.

EB: What was the initial idea for Second Home?

RS: We wanted to use architecture and cultural program to curate a community that would support entrepreneurship, job creation and innovation. It was a concept of shared workspaces that would host around 30 companies at a neighborhood scale. It was also related to cross-pollination of ideas, collaboration and technology. At our core, Sam and I both believe that entrepreneurship can be a force for good in the world.

RS: Yes, I think we live in a time when most people are skeptical about business and what business can do and what it's for. But we believe that the best entrepreneurship can help tackle some of the biggest problems we face and that socially responsible business is a movement. We believe cities deserve better.

EB: Can you tell us about the kind of organizations and business you want to be part of Second Home? Are they from a particular sector?

RS: We believe diversity fosters creativity. We select the people who are going to be based in Second Home on that basis. We want to make sure there are groups like charities, public sector organizations, and investors all together. We never allow any one industry to get over about 20 percent. The other the other thing we think about is building a clustered ecosystem within each building. So if you’re running an architecture firm for example, you could have access to a web developer, copywriters, accountants and a PR firm all nearby to bring ideas and services to your industry. As a result, we have really established companies alongside growth businesses, next to charities, next to really early stage organizations. There's a real mix.

EB: The Los Angeles project is your first in the United States. Did you have any difficulties in previous projects in London or Lisbon?

RS: It has been much easier here. London maybe be the worst place in the developed world to try and do innovative architecture. In the last 60 years a huge amount of capital has flowed into London, and in turn, a huge amount of development. But I think there are only a few examples of truly world class pieces of architecture built in London to show for it. I think if you’re trying to use new materials or create new forms in London, it’s awful. So we decided to come to Los Angeles to do it.

To illustrate, in our Second Home Los Angeles location, we’re planting six and a half thousand trees and plants. Our first project in London, planners told us we weren't allowed to plant eight. In L.A., there’s a focus on health, safety, seismic, and fire. And that’s great, we should ensure that buildings are safe. At the same time, in Los Angeles, you’re allowed more material and formal innovation, and it’s really exciting to see how we can work with that to create something new.

EB: Your Second Home project here is certainly a new type of development in Los Angeles, and at the same time, it feels like it’s very much a product of the city itself.

RS: Yes, there’s this great quote we like to use by David Hockney when he moved to L.A. in the 1960s. He was asked why he liked L.A. so much, and he said that, “It's the only place I've been to where you drive around and the building make you smile.” We feel that coming from London, and there's so much more diversity in the built environment here.

EB: Could you briefly touch on the Serpentine Pavilion and its new home in Los Angeles?

RS: The Serpentine Pavilion really came from a belief in civic spaces. We wanted something completely open to the public that was tied to cultural programming. It echoes our ideas in Second Home; to provide programming that is totally free for local charities or community groups to use, and that bringing different people together can be a good thing. We were lucky to be given a spot for the Pavilion totally for free, and I think that was a recognition that this is a civic gesture. It’s incredible to bring the Pavilion to Los Angeles and I’m glad we could be a part of it.

EB: So how did you start working with Selgascano?

RS: I actually first came across their Office in the Woods on ArchDaily. That was my first exposure to their work, and I thought it was really incredible. In turn, Sam had a personal connection to the office through his family, and when it came time to select an architecture firm to work with for Second Home, Selgascano was the natural choice. We’ve never had an architecture competition, and we won’t. They have gotten to around 20 people, and they don’t have a desire to grow. I think that’s really incredible, their commitment to taking on fewer projects to create really high quality work. And when they feel like a particular project is too large, they’ve recommended other practices for us to work with. Now we have a kind of “design network”, and I think it’s led to more innovative designs.

EB: One more question; what do you hope people see in your work and discover through Second Home?

RS: Second Home is about ideas, and fundamentally, we hold a belief that architecture at its best can have a profound impact on our creativity, our productivity and our well-being. To give one example, we found that creative jobs within teams based at Second Home in London have grown ten times faster than the national average. That’s partly due to this ecosystem of people, and partly due to the working environment that we’ve created. Architecture has genuinely shaped how they work. It has a practical impact, and it’s not simply aesthetics. That’s what our work is demonstrating at Second Home; that the environments we create can shape our lives and our work for the better.

Second Home is set to open early September 2019 in Hollywood.

Second Home, a London-based creative business, is set to open its first location the U.S. Designed by Madrid-based Selgascano, the project will see the transformation of the historic site of the Anne Banning Community house in East Hollywood through a 90,000-square-foot urban campus.