Save
The Glass Fortress / Archismith Architects 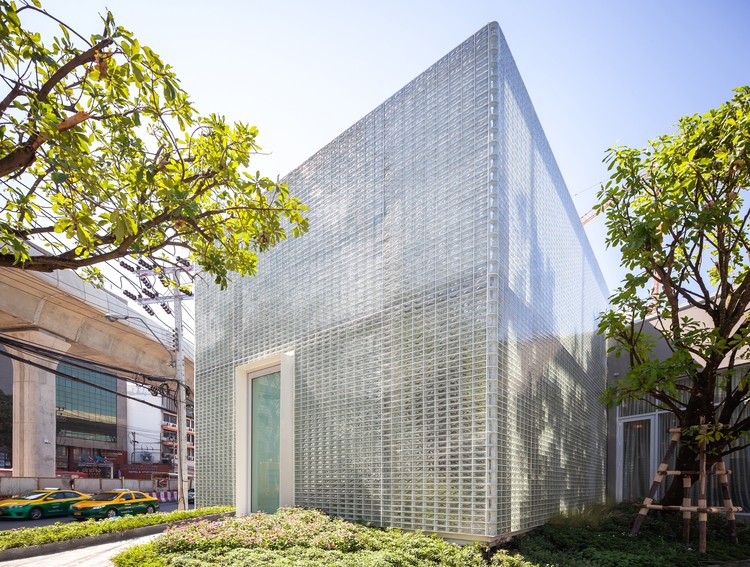 Text description provided by the architects. The building serves as the sale gallery for a condominium project in Bangkok. Due to its proximity to a competitor’s sale gallery, one of the requirements from the Client was that the building must disconnect itself from the competitor. Leaving a generous gap was not an option for functional reasons so the design team decided to angle the building’s orientation away from the main road to create distinction.

Aside from achieving the main purpose, the solution provides not only a visual break on a dense urban fabric but also a greenery for the passersby. In line with a large green space provided at the main condominium development as a strong selling point, the sale gallery sets aside some of its land along the street to become a pocket park in a bustling urban area. A simple box was then placed facing the incoming traffic to create a focal point and to balance out the whole architectural composition.

To make it stand out, the box features about 20,000 glass blocks with a secret garden hidden inside. The facade changes its look perpetually following the condition of sunlight and the shifting shadow of trees. At night, the glass blocks are illuminated turning them into a giant glass lantern. The glass blocks used for the project are rectangular as opposed to those conventional square-shaped type. They also have extended edges or wings to cover most of the grouting reducing the width to 2 mm instead of 10 mm as usual.

This special detail reduces the visual perception of joints, thus creating a continuous all glass effect to the walls. The repetition of glass block’s horizontal mortar joints helps reduce light transmission from the higher summer sun. Rectangular glass block will also cut down the light transmission by double as compared to the conventional square type. Moreover, due to its nature being double glazing with air cavity, glass block can provide more than double the thermal resistance (R-Value) of single-glaze 1/8” thick plate glass so it can help to reduce heat transmission into the building.

Another design challenge was creating a peaceful environment for visitors to enjoy the garden despite the heavy traffic in front. With an attempt to effectively cut down the noise pollution and to block off unpleasant views of the surroundings, the design team introduced 8-metre-tall walls enclosing the garden. To reduce the uncomfortable feeling of being surrounded by massive solid walls, glass block was chosen as the building material as natural light still can filter through it. Natural ventilation is encouraged by the stack effect caused by lifting the base of glass block enclosure up to allow movement of cool air to get inside and hot air to rise out through the opening on top.

In addition, a water misting system is installed to control the temperature inside the courtyard on sunny days. Through contextual design, tactical selection of material and integration of technology, a true serene microcosm within a chaotic city can be created within this glass fortress. 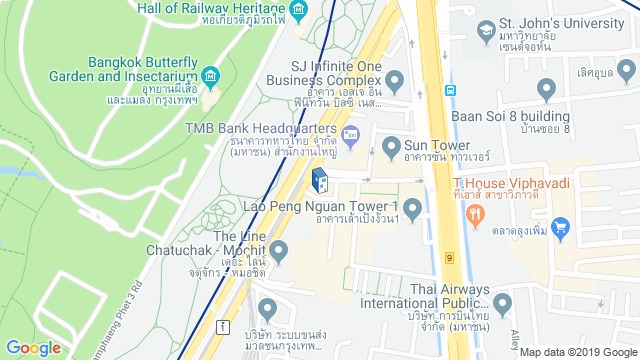 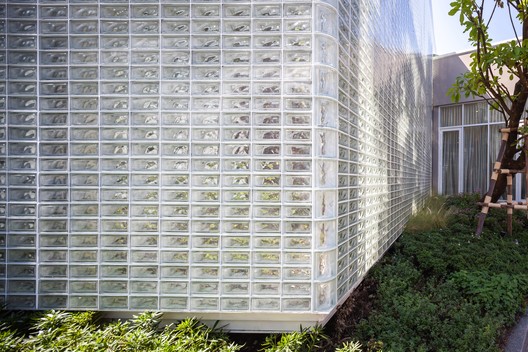 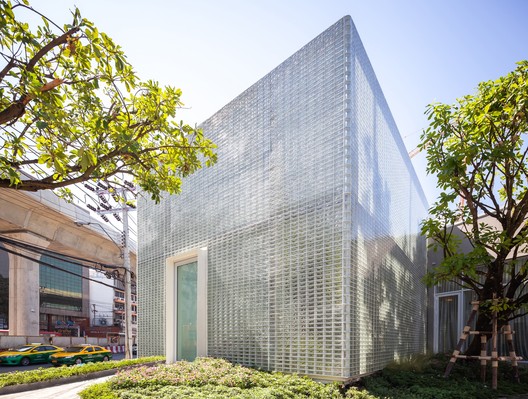