Save
Snøhetta, WCIT, and AECOM Unveil Radical Masterplan for Honolulu
Share
Or
Copy

Snøhetta, WCIT, and AECOM have released details of their proposed Neal S. Blaisdell Center Master Plan for Honolulu, Hawaii. Located in the urban heart of O’ahu, the existing 1964 center is home to the state’s premier arts and cultural venues. The aging structure is now set to be transformed by a 22-acre complex for future generations, featuring a performance hall, exhibition hall, sports pavilion, parking structure, and reconceived public space. 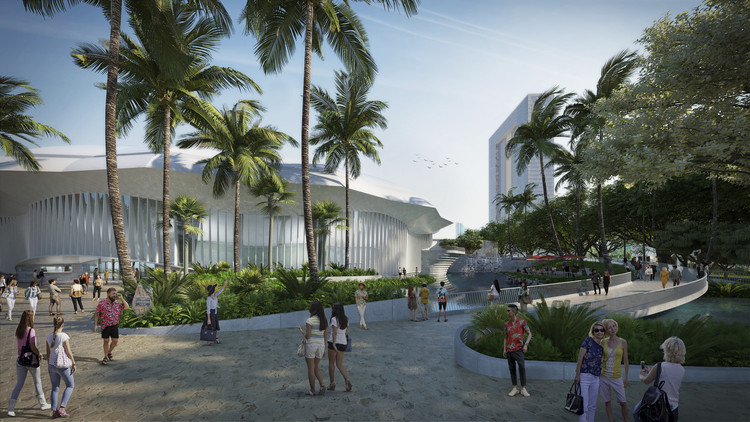 Throughout the masterplan’s design, a series of collaborative community and stakeholder workshops were held, allowing the design team to identify three core values: ho‘okahe wai (activate water), ho‘opili kānaka (gather community), and ho‘olaule‘a Hawai‘i (celebrate culture). Inspired by local perceptions of space and environment that emphasize a deep connection to the land and a reverence for natural resources, the scheme is conceptually guided by the importance of water in local culture.

The masterplan prioritizes a balance between pedestrians and vehicles, radically reconfiguring the campus to connect the back-of-house facilities of all venues on site with a single, below-grade service area. By lifting the majority of the ground plane over this supporting space, the scheme unlocks a new network of open spaces and unifying paths, while also allowing the logistics of the program to operate seamlessly.

A new series of lush, vegetated gardens terrace over the concealed back-of-house operations, while a reimagined public realm is composed of distinct spaces, each with a unique character and function. Stitched together, these outdoor rooms comprise a broader system that supports a variety of performances and recreational activities.

A series of highly-visible, interwoven water features celebrate the use of water as it moves through the site. The design respects the natural “mountain to sea” flow of water, thus becoming a node in a larger system of the water’s journey. On-site water can be categorized according to four distinct systems: a series of pools and cascading waterfalls that filter water, a historically-significant fish pond that supports a diverse aquatic habitat, an interactive fountain, and a stormwater management system along the street edge.

The scheme celebrates the architectural heritage and culture of Honolulu through the careful maintenance and upgrading of the existing concert hall structures. The upgrading of the concert hall follows a light touch, maintaining the characteristic rectilinear structure and low-base arches, preserving the architectural vernacular of the open-air lanai. At the multipurpose arena, the iconic scalloped, circular form is maintained while interior spaces are demolished and renovated.

The new structures on site are designed to evoke concepts of erosion, taking the sculptural quality of being shaped by water and wind. The new Performance Hall and Arts Ensemble will provide expanded opportunities for rehearsal and entertainment, while a new Exhibition Hall will replace the existing one with a more dynamic building. 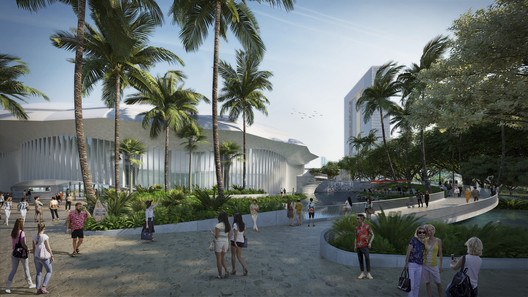