Hey5 has unveiled its design for the National Museum of Finland, an entry for a recent international design competition. The scheme is titled “Suppa,” inspired by the typical Finnish landform where a hollow is created by the melting of buried blocks of glacial ice. The ambition behind the proposal was to create a bold object containing a flexible organizational system to host the museum's demanding international exhibitions. 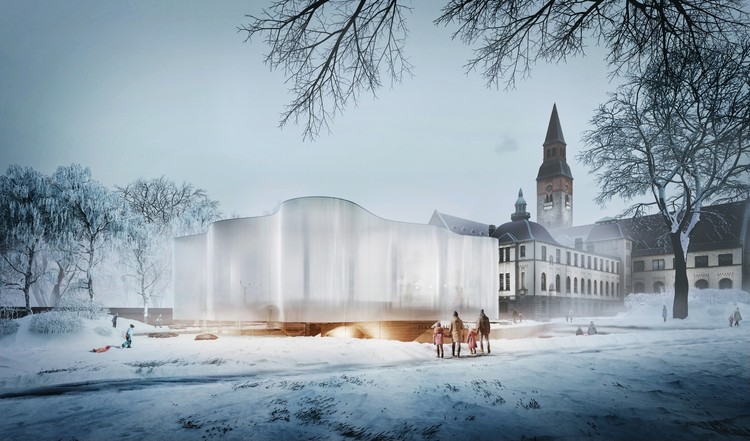 The addition opens a dialogue between old and new, one which is functionally connected underground, but visually disconnected overground. Placing a majority of the functions underground allows for the retention of the existing overground parkland, while a connection between the new and old structures is made through a reflective architectural language.

The existing museum features a National Romantic architecture, a counter-response to industrialization and machine production, instead celebrating craft and romantic tradition. The new addition is seen as a reinterpretation of the concept of “National,” embodying the spirit of “the object in the landscape.” The addition becomes a three-dimensional piece of furniture, with a curved underside defining the spatial arrangement of the entrance lobby while its top surface creates a landscape within the restaurant.

The translucent façade gives the volume an ephemeral cloud-like appearance. By elevating the mass as a suspended volume, a sunken chamber is created, dividing the scheme into four levels. The top level becomes the “image of the project” housing a restaurant. The next level below is a park, manipulating the ground to create a physical connection to the sunken lobby. 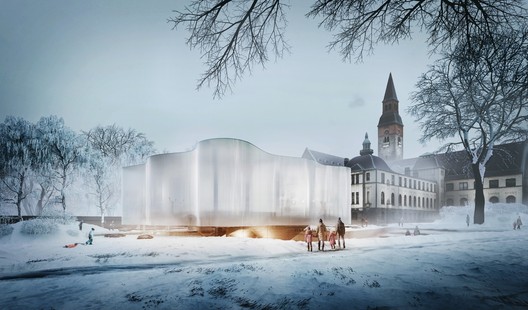