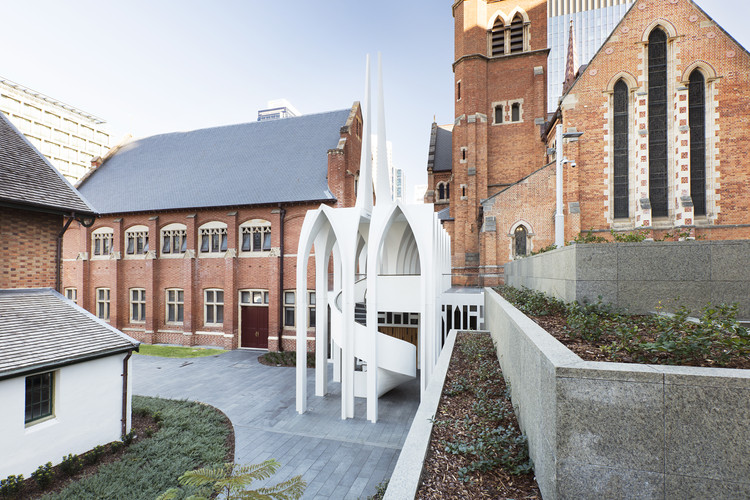 Text description provided by the architects. The Cadagon Song School was commissioned to complete the composition of buildings within the historical Treasury/ Cathedral precinct, and provide facilities for the St.George's Cathedral Choir. Located between St. George’s Cathedral, Burt Memorial Hall, Church House, and the Deanery, the 200sqm Song School was designed to not only visually balance the composition of unique existing buildings, but allow full access throughout the site. Consisting of a series of sculptural vaulted arches and a ‘tuning fork’ spire - a contemporary reference to the religious architectural language and defining lancet windows of the Cathedral – the scale and form of the vaults allows the eye to transition and understand the dialogue between old and new.

The materiality and color of the Song School were considered in response to the visual balance across the entire Cathedral site. The crisp white vaults reference the two existing visual extremes of the site – the Deanery and Ascalon, contributing to an existing language on a dense site. To preserve site lines, the majority of the Song School is subterranean and sits within the foundations of the Cathedral and Burt Hall. This portion of the building consists of a Main Hall, Music Library and Locker facilities. The protrusion of the entrance of the building allows for a visual definition from Burt Hall at the lower plaza level, while allowing significant natural light access in. Accessibility, along with renewed and additional functionality to existing prized spaces, defined the master plan.

The feature spiral stair allows for intermitting access to the Upper Plaza from the Deanery Garden’s. A new entrance to Lower Burt Hall, inclusive of a new Kitchen, Bathroom’s and Lift Access, creates another profitable space. Internally, the vaulted hall references the forms of a classical underground ‘crypt’ typically found in the depths of cathedrals, continuing the spirit and understanding of site within. A key requirement was that it should ‘acoustically’ match the existing Chancel within St. George’s Cathedral. Solid oak floors and custom milled diffuser wall panels clad the majority of the hall. The vaulted ceilings – comprising of curved concrete beams and perforated brass panels - house all Air Conditioning, Lighting and Fire services above - to successfully meet technical acoustic requirements.

The technical detailing and construction, for the benefit of the historical buildings, was greatly considered. The subterranean portion of the building sits offset from the existing buildings foundations creating a waterproof cavity in response too;
1 Significant issues with damp to the foundations of both the Cathedral and Burt Hall. This construction detail allows the building foundations to breath, while hidden checkpoints have been installed within the Song School.
2 The custom designed, natural brass capping, surrounding the perimeter of the subterranean portion of the building on the upper plaza, has been designed to visually disappear. Creating the weather protection and allowing air movement, the capping can be removed without any damage to the historical fabric of the site.
3 Allowance for the future movement of the existing buildings.
4 Hidden exhaust points for the Song School, which prevented the installation of large grilles to the upper plaza. 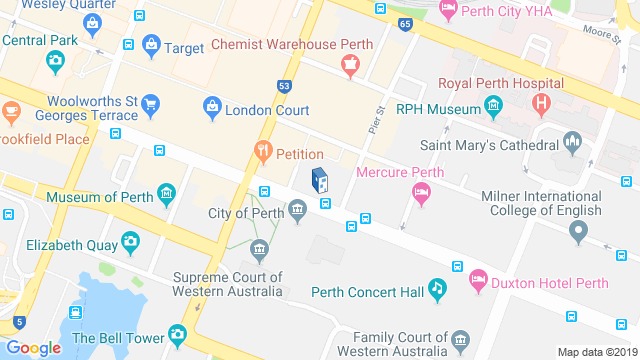 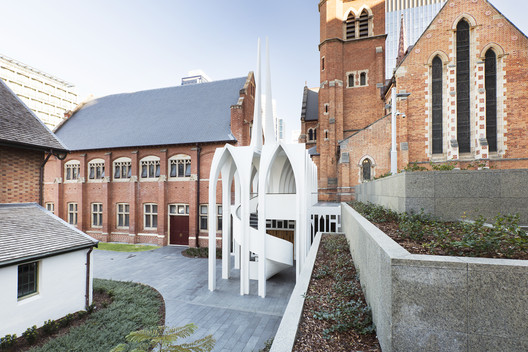