Chicago-based FGP Atelier and Taller ADG have completed the new Diablos Rojos Baseball Stadium in Mexico City. The monumental project was made to be the country's premier baseball stadium. Working with team owner Alfredo Harp Helú, the project's roof takes the form of a devil’s tail to reference the home team’s devilish name. 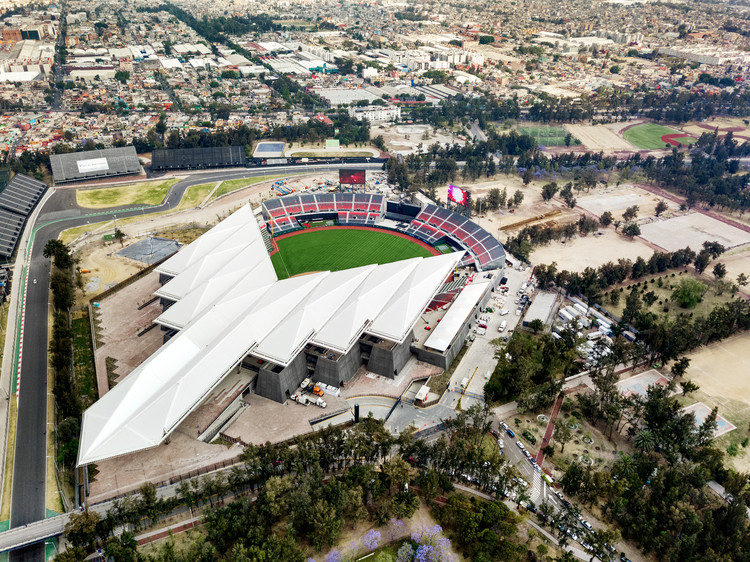 Designed to reflect Mexico's culture and history, the Diablos Rojos Stadium was made to integrate with the surrounding community while simultaneously serving as the home base for Red Devils baseball team. Located adjacent to the Formula One Race Track in the sports complex of Magdalena Mixhuca—a former Olympic Park that continues to serve as a venue for cultural, social, religious, and sporting events—Gonzalez Pulido worked with local architect Alonso de Garay of Taller ADG to establish a cohesive flow.

As the team explains, upon entering the stadium, visitors are confronted with six truncated pyramid-like forms clad in indigenous volcanic rock which form the base to much of the structure while also providing outdoor terraces at the higher level away from the arena that include food stalls and an area for socializing. The shape and materiality of the forms, which recall ancient Mesoamerican temples, serve as a reminder of the country’s rich history and provide an awe-inspiring entrance.

“Estadio Diablos is much more than a stadium, it is Mexico’s ballpark,” Gonzalez Pulido says. “We challenged ourselves to create a stadium that would serve as a social and cultural center for years to come. As Estadio Azteca is the home of Mexican football, we intend for Estadio Diablos to become the home of Mexican baseball, and with it to offer inclusivity, encourage social engagement, and incorporate Mexican traditions. It was designed from the start to serve as one of Mexico’s landmark institutions and to re-instill a sense of excitement and passion into the sport of baseball.”

Overhead, the iconic roof stands out in one of Mexico City’s largest stadiums to date. The lightweight structure is composed of steel wrapped in PTFE textile material that plays off the light. The largest crane in the world was employed to bring the massive truss structures into position while digital scanning techniques secured precise alignment. It was also designed to collect rainwater to prevent waste.

The actual stadium itself exhibits the feel of an open-air amphitheater because of the ‘floating’ trident spear roof and features 11,500 covered seats and 8,500 additional seats in the outfield. The project was made to encourage social interaction within and outside of the stadium, with the pyramid-like structures designed to integrate a public plaza circling the stadium. The plaza has various objectives—it is meant to be used year-round as a market for the community members to sell their goods—thus expanding their ability to create a sustainable source of income—and to bring a diverse group of people together.

Estadio Diablos was designed to bring culture and technology together, and in turn, provide new arenas for social engagement while celebrating Mexican culture. 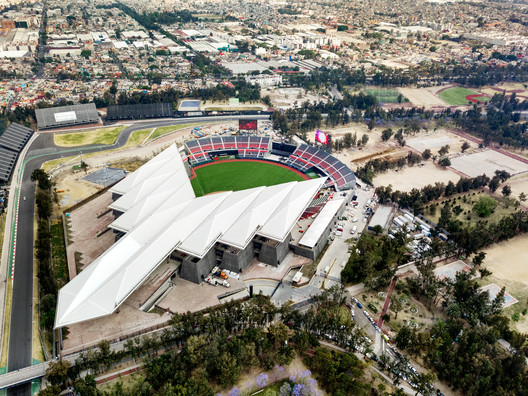