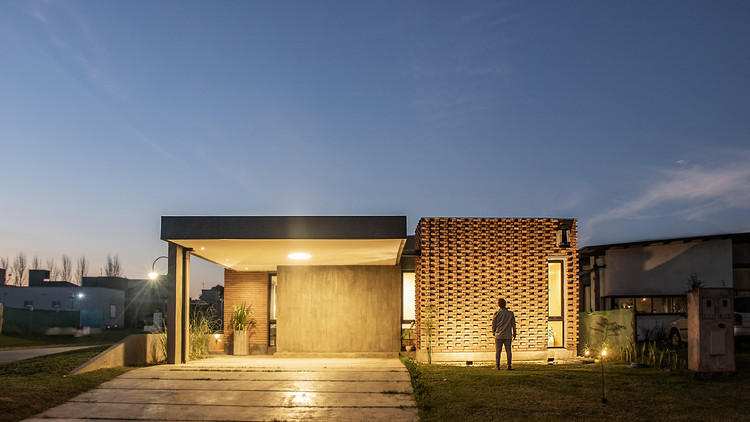 Text description provided by the architects. Casa Quintas is located in a gated community in Tafi Viejo, a suburb minutes away from the capital city San Miguel de Tucumán. The parti finds its roots moving away from all the modern architectural preconceptions of a typical country clubhouse in Tucumán’s suburbs. The first sketches were inspired by some sort of "Revival" on what was once the typical patio house.

A large courtyard is the center of the composition, connecting the spaces and interacting differently with each and every single one of them. Thereby the social area projected in a single large fluid space opens completely to the courtyard, while the private area’s relationship to it is more subtle allowing lighting and ventilation without putting intimacy at stake.

In Casa Quintas two materials with great presence coexist harmoniously. The common ceramic brick is used in different ways interacting with each volume, with natural light, generating dynamic light penetrations and shadows changing throughout the day. Off form concrete expresses its beauty with vertical boards of brushed wood, becoming the star in the front facade and in the internal patio, also a large off form Concrete beam crosses from beginning to end and joins the brick blocks that make up the front of the house on the corner.

At night, lighting becomes an important element to produce different sensations. On one hand, the brickwork generates light and shadow play and on the other, a couple of hidden searchlights beside a retaining wall bathes the three brick blocks from the bottom to top.