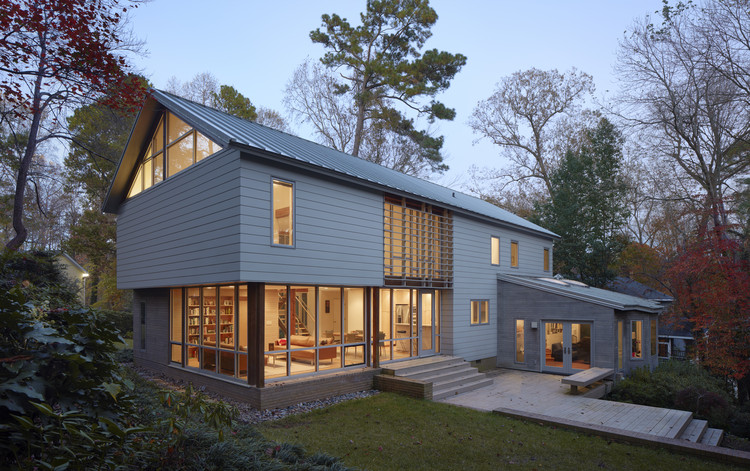 Text description provided by the architects. This renovation and addition project transforms a typical suburban colonial house into a dwelling that is open, naturally day lit, and engaged with the landscape, garden, and sky. Located on a steep forested corner lot, reforming the landscape was a critical component of the project to anchor the project into the hill side and to create a new terraced garden.

The existing garage was demolished and the vernacular form was extended to the garden to create a new two story transparent entrance and living area with expansive views to the garden and sky.

Re-envision. The goal was to transform a closed-in inward-looking colonial box and repurpose the structure into an open transparent volume for living with nature. Faced with an economic choice to build new on a lot far away from downtown or renovate an aging colonial home closer to town, the owners decided to re-envision a typical colonial box and transform it into a sustainable modern house with views to the outside.  The owners’ love of gardening and natural light was an inspiration for the project and generated the opportunity to create a transparent structure and completely redesign the garden and landscape.

Subtract-Extend-Reconnect. The existing house had previously been both compartmentalized and separated from the garden by a one car garage.  This garage was “subtracted” or demolished to create opportunities for greater transparency and reconnect the house with the garden.   The subtraction allowed for new views from the kitchen and expansive views to the north and south.   A new steel stair and bridge is extended from the existing second floor hallway which connects to a new master bedroom.

The new master bedroom is a volume “extended” into the garden and away from the existing colonial box separated from the old by a new glass storefront wall and bris soleil.  A new fiber cement “wrapper” completely wraps the new and the old.  The addition is supported on an exposed douglas fir heavy timber wood structure.   Two volumes, an existing play room addition and a new storage/work room,  that were outside or under this fiber cement wrap were clad in local atlantic white cedar.

Reforming the landscape. The backyard was transformed from a completely forested area to a new grass terrace that is an extension of the new open living and dining room space.  A new landscape masonry wall was extended far from the foundation wall into the forest to create a new terraced boundary between the man-made garden and natural forest.