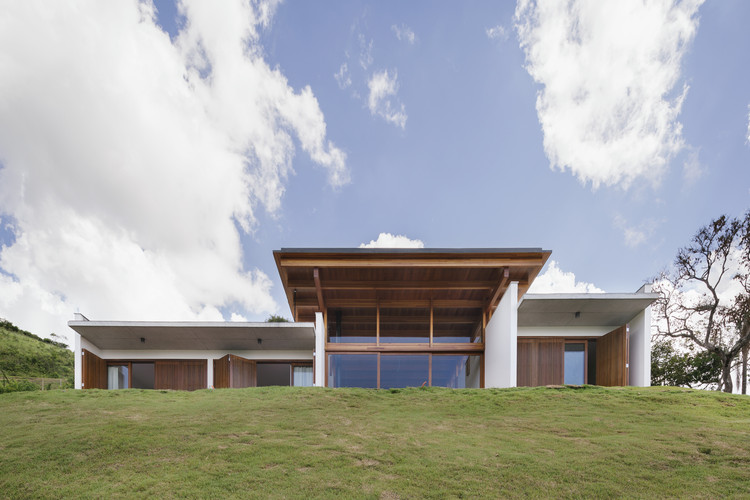 Text description provided by the architects. The circumstances inherent to the design of 'Casa do Monte' refer to one of the most primordial themes of architecture – the relation between work and landscape. In this sense, because it is located on the top of a mountain, such a relationship can be explored in order to perceive the uncertain boundaries between the horizontality of the landscape and the figure of the architectural work. As of this premise, the structure that shapes the spatiality of housing arises from the positioning of five parallel planes, whose interval between them determines the functional and structural character of the project.

The conjunction of these plans creates the structuring axes, enabling two ways of relating to the exterior: the longitudinal axis to them, which turns to the divine exterior of the landscape, and another transversal one, which articulates the various crossings and environments that configure the form of dwelling in the house. The choice of a one-level construction reaffirms this premise of continuity between environments, as well as between interior and exterior. By expanding all the inherent uses of housing in the same area, it is possible to explore the various possibilities of occupying and experiencing the plot. Be it in the inner spaces, or in the outer areas. There is only a level change, in the pool area, which is leveled with the slab of the two wings for the bedrooms.

As they are covered by a layer of grass, they also become the floor, thus allowing the configuration of a belvedere that turns to the surrounding landscape, having the celestial vault as their protection. All spaces relate with the outside and such relation is reaffirmed as of the expansion of the elements that shape the spatial structure of each of these environments. The extension of such outwards spatiality is seen in the continuity of the wall plans, the concrete marquises, the porch floor – which earthy tone refers to the region's soil tone. This lack of determination seeks to create this outside shelter, reinforcing the relationship with its surrounding landscape.

In the central space, the relation between the exterior and interior escalates in power, with a cover whose structure stands out from the volumetric analysis of the other rooms. The detail of fastening the wood in the plans of masonry, besides storing the memory of the construction process, referring to the struts of the concrete beams, allows the entrance of light, and the exit of the perception towards the outside. The space in between, from the most external to the most interior, takes the appearance of a square. Almost external, almost internal. Light, air, people and landscape. All of them meet themselves. 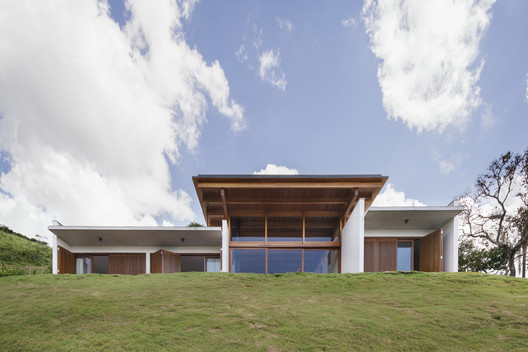