The winners of the Kaira Loo Competition have been announced, dedicated to the design of a Peace Pavilion to be built in the city of Sedhiou, southern Senegal. The objective of the competition was to create a symbolic structure serving as a memorial to the victims of African wars, and that would sensitize the local and international community by creating a commemorative and educational space that respects both the environment and local traditions.

Over 600 projects from around the world were submitted, with featured projects hailing from China, Italy, and Colombia. The winning scheme will now undergo an evaluation by a team of expert architects and engineers to examine its financial and technological feasibility. Ultimately, the scheme will be constructed on a clay terrain along the banks of the Casamance River, facing the city. The project is therefore a fusion of built and natural, with various spatial functions such as a street market, central piazza, two sacred trees, and a nearby conference center.

We have republished the three winners and two honorable mentions below. For more information, including finalists and special mentions, visit the official website here. 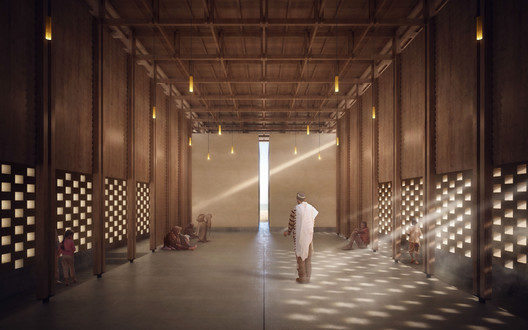