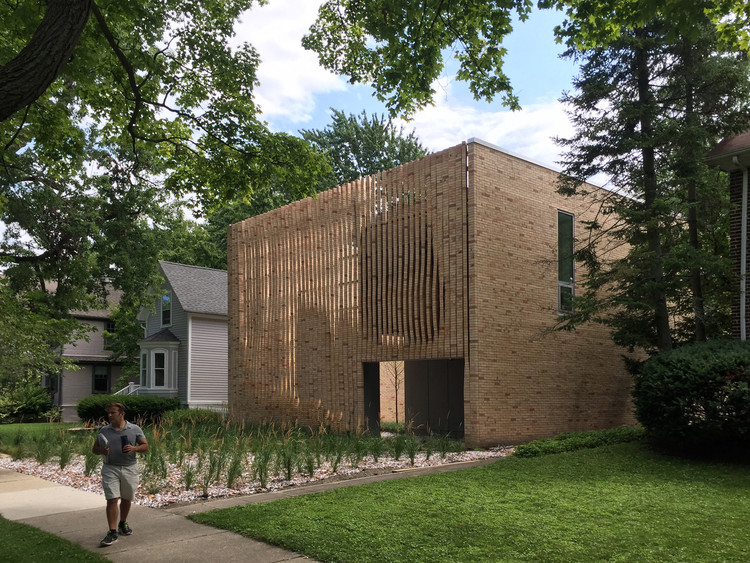 Text description provided by the architects. Located within a few blocks of the campus of Northwestern University in the suburbs of Chicago, this modest sized courtyard house is wrapped almost entirely in brick. Chicago “Common” brick, as it is known, was chosen because they look different from typical red bricks - a result of the geological composition of the indigenous Lake Michigan clay and the way in which it is fired.  It’s variegations and irregularities made “Common” bricks unattractive, cheap and an abundant resource—a prosaic building material used in places generally obscured from the street such as side and back walls, chimney flues, and structural support behind facades.

Conversely, the brick at the Thayer House is highly visible and featured as a prominent design element.  The street facade is organized in vertical twisting columns to create an ever-changing pattern of opening and closing as light moves across and thru the facades.  As the viewer passes by the home, the façade creates a moire-like pattern that appears to be constantly in motion. Depending on one’s location, the porous courtyard façade courtyard can appear open and welcoming while also feeling closed and private.  This allows glare free daylight to penetrate into the building through glazed surfaces behind them, as well as creating a glow from within when the lights are on at night. Light seeping through the brickwork produces a shifting geometric pattern of light and shadow on the walls and floors of the rooms, circulation areas and neighboring structures that alters throughout the day.

The design examines the tension between materials, form and experience.  Of particular interest is the idea of transcending traditional craft and elevating humble materials without trying to make them into something other than what they really are.  It is an attempt to find and reveal the extraordinary from within the ordinary.  This exploration encourages the user to forge a deeper and more meaningful understanding of the fundamental, yet delicate relationships that exist between themselves, the natural world, its vital resources, and our collective cultures.

By using the familiar in an unfamiliar location and application, the material become perceptually both old and new at the same time.  This makes one more aware of, not just the building, but also our sense of place.  There is a sense of discovery, something spontaneous and unexpected.  The object is important but it’s the experience that has a profound impact and leaves something that lasts well beyond the mere physical and visual existence of the building. This gives us the opportunity to not only learn about design but also, about ourselves, our collective cultures and our place in society. The philosopher John Dewey described this idea as the transformation and conversion of memories from our subconscious into a tangible and unified whole.  Buildings need this context to be understood and to be relevant to society. It gives historical perspective, connecting buildings to people and our collective cultures. Without such context, buildings are simply objects to look at, and not places that bring vitality and meaning to people. 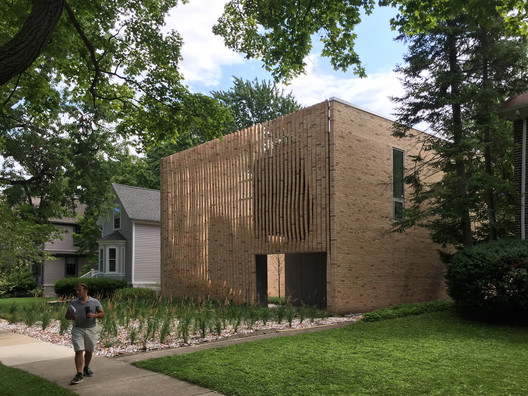