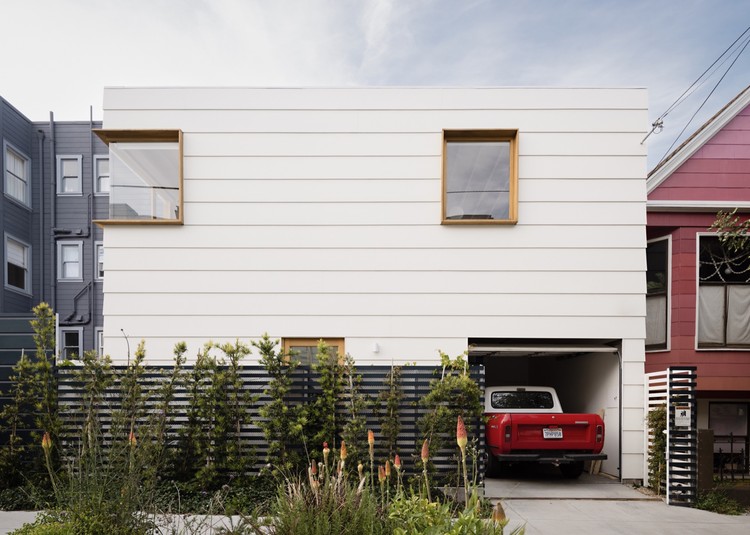 Text description provided by the architects. Located in San Francisco’s Mission District, a neighborhood known for its history and diversity, the Harrison St House adds a modern counterpoint to the urban context while creating a secluded sanctuary for a young family. Drawing on the courtyard-house typology, the project centers around an interior garden, which is the first space one experiences when entering from the street.

Conceived as a home in two parts, the more private functions of the house take place in the newly built 2-story structure at the rear of the lot, while opposite the courtyard, a remodeled front building is used for more social functions and gatherings.  Designed to celebrate the owners’ love for gardening and spending time outdoors, the ground floor living space opens onto the courtyard with a set of lift and slide doors. Materially, the exposed concrete flooring at the interior extends into the garden, dissolving into a series of linear pavers, interspersed with lines of a drought-tolerant sedum.

While maintaining a compact footprint, the new house has an open kitchen/living room, half bath and garage on the ground floor, and 2 bedrooms and 1 bath upstairs. A flush wall of cabinetry offers storage and a display area without encroaching upon the space. The primary bedrooms and bathroom are on the upstairs level of the house, where an exposed rafter ceiling and bleached Douglas Fir floors give warmth and rhythm to the spaces. A lightwell brings fresh air into the hallway and nursery while also providing an outdoor space for the kids to play.

Across the courtyard stands the existing structure on the lot, an early Italianate-style commercial building with a butterfly roof. Originally built in 1888 to be a saloon and home for the bar’s proprietor, the building had seen many uses over the years, but had fallen into disrepair by the time the property was purchased by the current owners.

Wanting to preserve the historic character of the space, the existing wood structure and ceiling rafters were refinished and left exposed, while the old windows, floors and finishes were replaced, creating a greater sense of continuity with the new house. Keeping with a subtle palate of natural wood tones and white surfaces, the front house was designed to be a relaxed social space, where kids’ playtime and afternoon lounging can easily evolve into an evening dinner party.

An onsen-inspired bathroom complete with a cedar-lined sauna and outdoor tub/shower, encourage relaxation and the spirit of communal bathing while a custom, hand-painted mural by a local painter enlivens the space. Drawing on contextual cues, the primary façade of the new structure echoes the traditional, horizontal siding seen on the front house and throughout the neighborhood, while offering a playful interpretation of scale and materiality.

While the house enjoys its inner garden and cloister-like character, a major aim of the project was to give back to the neighborhood through the creation of a public green space along the street edge.  To do so, large sections of the sidewalk surrounding the house were removed to create large planter beds, which the owners tend.