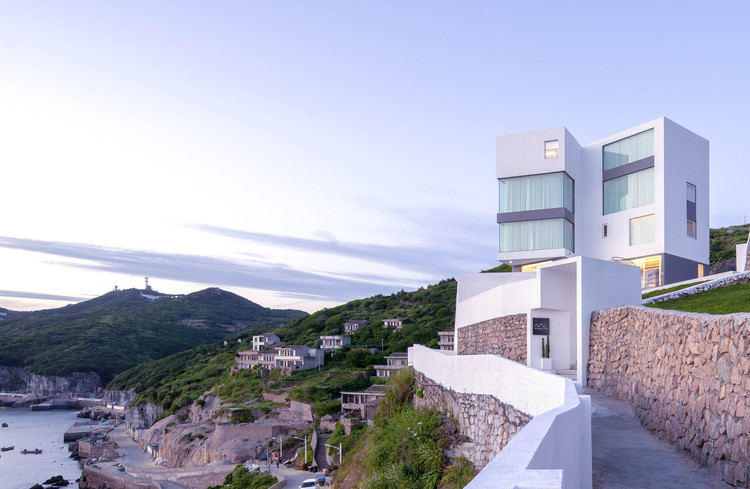 Limitations and claims
This project is located in Shengshan Town, Zhoushan City, Zhejiang province. The local B&B project has a clear implementation manual, which limits the total area, floor area, height of the building, and even the architectural style. As a result, architectural styling and space creation are extremely limited.

As the most inhabited island in the east of China, Shengshan Island has humid air, strong winds and even typhoons. The construction materials are limited, and transportation costs and labor costs are significantly higher than those outside the island.

The owner and sister hope that the area should be used as much as possible, try to have different feelings in each room, and each room should have as many sea-viewing interfaces as possible; hope to at least be the top-ranking B&B project in Zhoushan area, and try to control the cost.

Form and landscape
In the phase of conceptual design, more than ten conceptual plans were provided for discussion, and the owner finally chose this several-block occlusion scheme. In more than a year, I have been on the island more than ten times. Once the owner mentioned, I haven’t been to a deserted village (a local tourist attraction), so I went there and went on a chat and continued to discuss the plan. Their hometown was originally in this village. Due to the inconvenience of life, the villagers gradually moved away. She felt that the staggered occlusion of the body in the implementation scheme was not similar to the scattered house in the village.

Perhaps it is a coincidence, perhaps a similar form has drawn memories.

However, it can be clarified that the starting point of the layout of the physical design of the case is based on the owner's appeal and the site landscape resources.

The project is completed, the seven rooms are different, 101 have a private pool area; 201 has a picture frame sea view, facing the central island in the distance; 202 has a 270-degree wide-format sea view; 203 has a mountain and sea view; 301 is Suite, living room bedroom with wide format sea view, bedroom with full bed size skylight and private small courtyard; 302 is also a duplex suite, living room 270 panoramic sea, bedroom and main guard with starry skylight, and sea breeze terrace Spacious separate small courtyard. 303 lying in bed to see the mountains to see the sea can also see the stars.

Path and feeling
The project itself is not large in size, and the building is only about 400 square meters. The site will be slightly looser than other projects on the island.

The plan stretches the path up the mountain and bends the path inside the courtyard to appropriately lengthen the walking route of the guests, to precipitate the state of mind and increase the expectations of the guests.

Space and time
Through the horizontal and vertical multi-layer penetration of the space, together with the change of the position of the window, the light entering the room is controlled to appear, and the line of sight is infinitely elongated, allowing the space to flow. I hope that in a small space, through the design method, the perceptual space will be enlarged, the time will be slowed down, and the space type will be enriched. In order to avoid the relatively monotonous and uninteresting experience in the regular corridor string type of project. 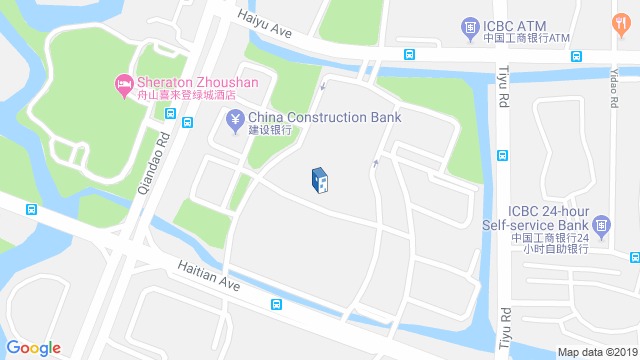 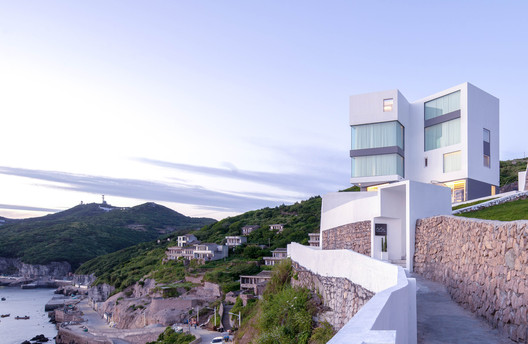