Save
House B / KdnD Studio LLP 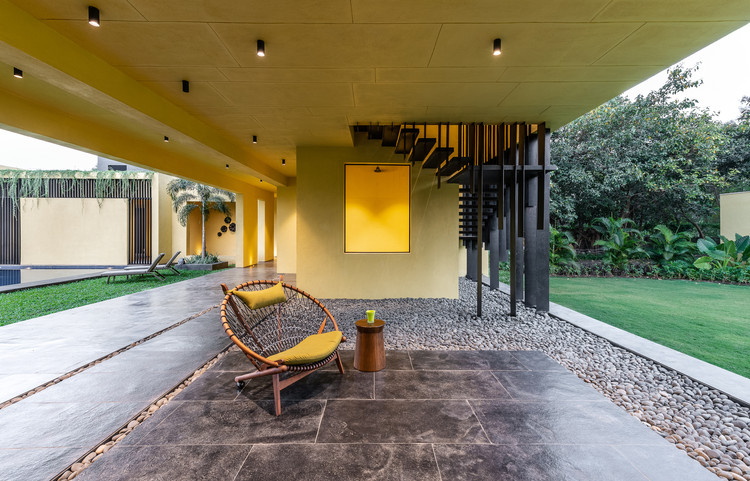 Text description provided by the architects. Fluctuating scales, transforming spectrums of light & a color palette that dictates vitality & warmth. Casa B, an Alibag Getaway home designed by KDND STUDIO LLP is what tangible bliss is made of.

With a context eluded of the boisterousness of their Mumbai lifestyle, the client’s family entrusted the design firm with the genesis of an abode that would be an equivalent of that of a ‘Second Home’ set in the plush fringes of Alibag.

Roughly a 2 Acre site interspersed with scattered palm vegetation & a monumental mango tree, set the stage for the design premise of House B. A sense of intrigue builds as one navigates the driveway & is welcomed by the built form soaked in a sunny hue of yellow entwined with the element of green foliage. The built structure plays a hide & seek of sorts as its façade harbors capacious spaces indoors while simultaneously projecting a minimalistic exterior.

The task at hand was to design a form that would be inconspicuous to the public eye to generate privacy whilst consisting of a series of seamless spaces at an internal micro level of design. “An integrated space such as this emerged by the conception of forms that amplified a horizontal axial development, responded to the local climate & that developed to be intrinsically synonymous with the client’s lifestyle sensibilities.”, shares Shobhan.

A two-year period of construction went into creating this ensemble of 14,000 sq. ft of a space which is a concoction of stark architectural & rejuvenated nuances. The project’s vital internal zoning has been based on the activity parameters & engagement of the inhabitants with the nooks of the home. The physical zoning may be visualized as three horizontal ‘bars’ of activity zones placed in an array to suggest three distinct sections of functional needs & movement. The entry into the plethora of spaces is via a cascading set of steps that open up into an elaborate arrival plaza replete with tropical strains.

The Central Courtyard zone housing the linear pool is the ‘nucleus’ of the home. Flanked on either end with Changing Room units, the Kitchen section & a quaint Lily Pond, this central section of the form acts as the spine of the design layout. The college of recreational activities with the core function of that of a Kitchen collated with engaging softscape allows the family to gravitate towards one another’s presence.

The Southern Block is a G+1 unit which is constituted of the private sections of the residence in the form of Bedroom spaces & some auxiliary recreational zones. The ground floor consists of the Guest Room, an Entertainment Room that spills into a lush Verandah setup, A Pooja Room & a connective staircase that facilitates vertical movement to the first floor. The first floor is an amalgamation of 4 ensuite Bedroom units with the addition of an intimate Family Lounge & is essentially the most private section of the design framework. Each Bedroom has been curated in aspects of furniture sourced primarily from China, upholstery, art & ornamentation to breathe distinct character in it whilst maintaining a unifying ‘Tropical Modernism’ theme throughout.

There is an uninterrupted dialogue of linked spaces through the skeleton of the house that breaks the confines of an inside-outside segregation & transcends the stereotypical norms of space interplay. The entire framework of the built form is strung into a harmonious interplay of dramatic sciography, color schemes, changing daylight patterns, ventilation & volumetric disposition of spaces. Connective Pergolas, Water Bodies & offset spaces grace the home’s spread & weave an ambience that leaves one transported. Transparent & non-enclosed attributes of spaces indoors take precedence in the design layout of the interior & exterior matrix.

With Alibag’s weather conditions that operate in extremes of heat & rainfall subjectivity, a materiality that was durable & simultaneously aesthetic became imperative in order to strengthen the project’s sense of identity & timelessness. Polymer Plastered exteriors in yellow, river washed Kadapa stone in black utilized in varied size ranges find applications through the expanse of the nooks. Stained Black Oak has been utilized to create paneled doors which further add an umber tone to the interior scheme.

“We needed a place that would be the idealistic escape from the drudgery of everyday life in the city & Shobhan along with his team has given our family’s needs an immaculate form. It’s our ‘oasis’ of love & wellbeing!”, says the beaming client.

The Architect further adds, “House B has been the quintessential romance of composite layouts of spaces bound together by a unanimous sensibility of aesthetic, function & concepts. The spaces have been stitched together to create a homogenous fabric of sensible design that radiates refreshment & ease. Essentially, a home away from home.”

This residence has come to embody the image of a getaway abode which tends to its users emotional & physical facets of rejuvenation with its alchemy of ‘feel good’ niches layered with tactile factors, that function in synchrony allowing one to spend days indulging in the embrace of architectural finesse.